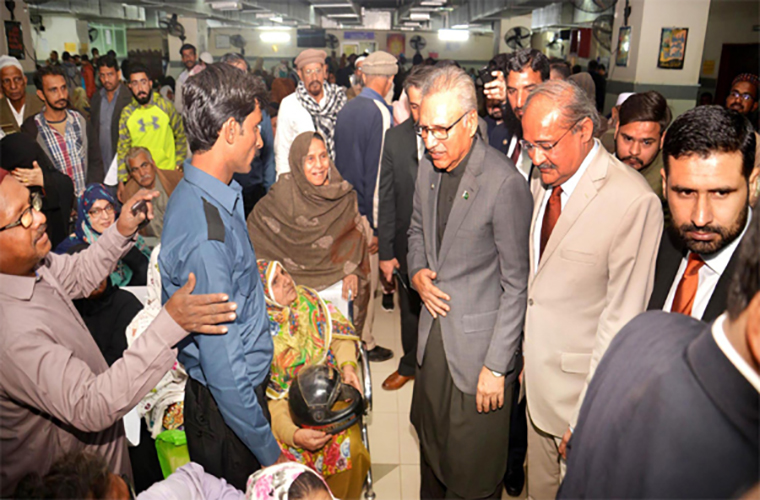 While talking to reporters there, he acknowledged urgent need for at least one more 500-bed children hospital in Karachi.

He referred to the critical requirement to meet the growing pressure of patients from the city itself and from other parts of the country.

Besides, he lamented having seen four to five child patients accommodated on a single bed at the NICH.

He termed it definitely a matter of serious concern for him and also for the entire government.

The situation, he said, reflected the intensity in terms of patients’ load as well as that of resource constraints.

To a question, President Alvi said it was on the advice of Prime Minister Imran Khan that he was visiting the facility.

“I have also sought details of the recent tragic incident at the NICH causing loss of a precious life,” he said.

However, he also told the media of NICH Director Dr Syed Jamal Raza detailed presentation on the working of the facility. He briefed about 70 incubators at the NICH,.

The President reminded that was in compliance with the orders of Supreme Court of Pakistan.

Meanwhile, he also reminded that equal responsibilities lie upon the federal and provincial governments to ensure smooth transfer of administrative control.

He said that would help avoid inconvenience to the patients in any manner.

Both of them took round of different wards and distributed gifts among the child patients.

He observed with concern that many of them have to procure medicines and other essential accessories for the kids from outside the hospital.

“We are answerable to these kids being treated at the public sector facilities,” he said, while noting these as major challenges as load is much more than resource capacities of each of the government hospitals.

“Concrete and long term measures have to be taken,” he said, adding the support extended by philanthropists was highly appreciable.

“We have to realize the intensity of situation as there are several charitable hospitals trying to meet the needs but the demand for quality and specialized medical care is ever escalating,” he emphasized seeking equal attention towards prevention and timely interventions.

The president later also visited National Institute of Cardiovascular Diseases (NICVD).
He on the occasion took round of the emergency units, out-patient department (OPD), adult wards, cath lab and different assessment units to help procure first hand information about the well-being of the patients. He mingled with the heart patients and their attendants.

The president said their care was to be duly accorded top priority by the their representatives at the provincial as well as federal levels.

NICVD Executive Director Prof Dr Nadeem Qamar gave him a detailed briefing about the services being provided free of charge at the institute and its satellite clinics in different parts of Sindh.