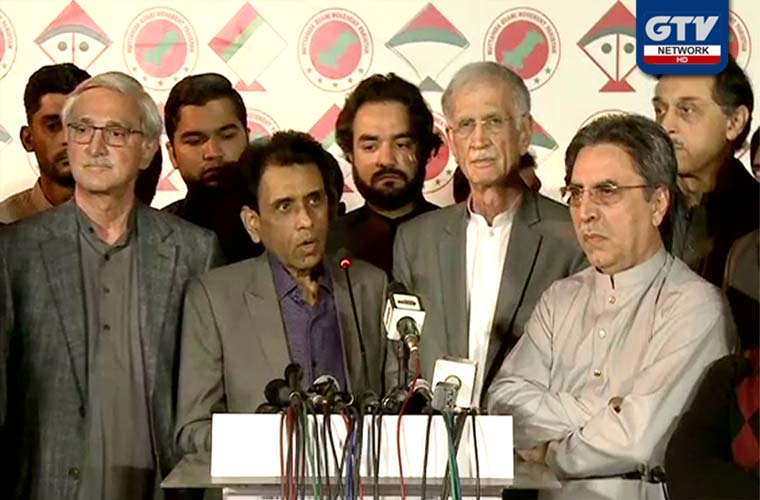 MQM demands reopening of its offices

However, MQM-Pakistan leaders demanded reopening of its offices and implementation of Karachi package.

They further demanded establishment of a university in Hyderabad besides development package for Hyderabad.

Meanwhile, the leaders of the two parties also spoken to the media.

Siddiqui said that they had already told the PTI of the issues. At that time, PTI assured MQM of resolving those issues.

Tareen said they acknowledged importance of those issues but he hastened to add that everything cannot be corrected overnight.

He said that they had come to help resolve the grievances.

Khalid Maqbool said that Karachi has fallen victim to economic terrorism for more than a decade.

He said that Karachiites were deceived in the name of 18th Constitutional Amendment.

Both leaders discussed development schemes which federal goverment had planned for Karachi and the province.

However, Mustafa Kamal of PSP also has hurled accusations on intra-MQM differences.  He accused Amir Khan of forcing Khalid Maqbool to resign as Federal Minister.

He was talking to the media on appearance in an accountability court in Karachi.
He claimed that Amir Khan is seeking to get a ministry for Aminul Haq through this move.
The PSP leader urged Kunwar Naveed and MQM’s workers to support Dr Khalid Maqbool Siddiqui.
He slammed Amir Khan for doing politics with Khalid Maqbool. Furthermore, he suggested Dr Khalid Maqbool as Mr clean because not involved in bloodshed.