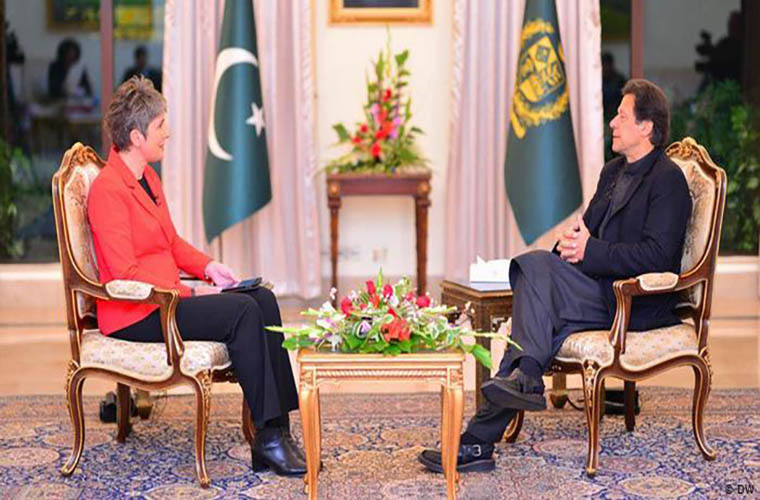 Prime Minister warns of threat to world peace due to Hindutva ideology of India.

Imran Khan said this while expressing his views in an interview with German DW Television.
Prime Minister warns of threat
He said that India’s racially extremist ideology of Hindutva poses a threat to peace in the region and the world.
PM Khan noted a racially extremist exclusive ideology Hindutva has taken over India and it takes strength from RSS.
He further said that the founders of the RSS established it in 1925 and Nazi party of Germany remained their source of inspiration.

DW Editor-in-Chief Ines Pohl began interview with this question.
Mr. Khan, you probably have one of the most difficult jobs in the world. Your country has to balance ties with the United States and China. Beijing wants to invest in Pakistan, but that, of course, strains your relationship with Washington. Your country also shares a border with conflict-ridden countries like Afghanistan and Iran. How are you managing all that?
Imran Khan answered.
It’s true that we live in a difficult neighborhood and we have to balance our actions. For instance, Saudi Arabia is one of Pakistan’s greatest friends and has always been there for us. Then we have Iran, with which we have always maintained a good relationship. Therefore, a military conflict between Saudi Arabia and Iran would be disastrous for Pakistan. We are trying our best to make sure that ties between these two countries do not deteriorate. It is a region that cannot afford another conflict.
Then there is Afghanistan. Pakistan is doing its best to bring peace to Afghanistan. It is a country that has suffered so much in the past 40 years. We pray that the Taliban, the Americans and the Afghan government achieve peace.