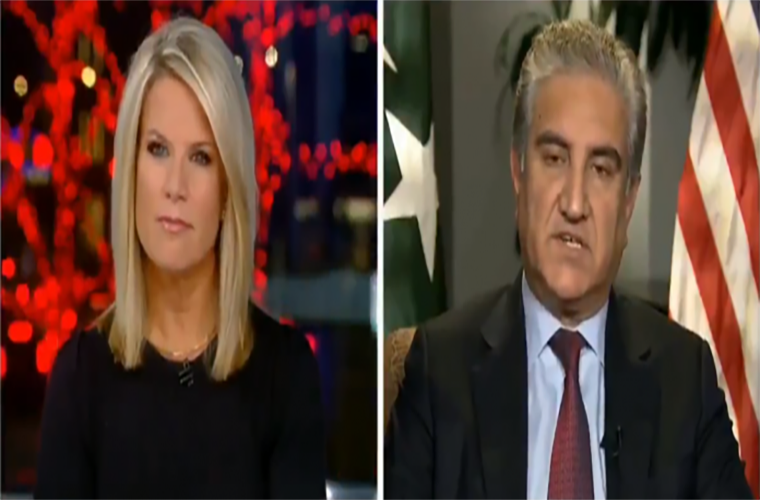 Foreign Minister of Pakistan calls for responsible US troops pullout from Afghanistan.
He said this, while sharing his views on regional situation in an exclusive interview with Fox News today (Friday).
He asked the United States not to repeat the mistake of 1980s’ pullout. But he called for a responsible withdrawal of troops from Afghanistan.

“Pakistan is asking [the U.S.] for a responsible withdrawal unlike 80s which created a vacuum for the destructive forces to take over,” he said.
Shah Mehmood is visiting Washington D.C. to hold talks with the U.S. administration in the wake of regional tension.
He was referring to the commitment of President Donald Trump on pullout of troops stationed in the conflict-hit Afghanistan.
Furthermore, he also cited Pakistan facilitated a dialogue with Taliban on the request of President Trump in a hope for peace and stability.
While answering a question on primary goal of his recent talks with Iranian president Hassan Rouhani, the foreign minister said that aimed at de-escalation and diffusion of the conflict.
He added that the talks aimed at averting negative effects in the region.
On Afghan peace process, he expressed hope of an agreement between the U.S. and Taliban. He noted that Taliban are today talking to U.S.
He also expressed optimism regarding possibility of an agreement due to Taliban’s Thursday announcement of a ceasefire of 7-10 days before they could take next step leading to dialogue.
Asked about the role of Inter Services Intelligence (ISI) in supporting the Haqqani network, the foreign minister said, “Let’s not discuss the past but future, which is in every body’s interest.”
However, he also mentioned ISI’s support for the Afghan peace process.
Foreign Minister pointed to the ISI’s support to the peace process.
He said ISI had been facilitating and have used their little influence to bring the Taliban to negotiation which the U.S. asked for and which they delivered.

Safety Investigation Board to probe PIA plane crash in Karachi.