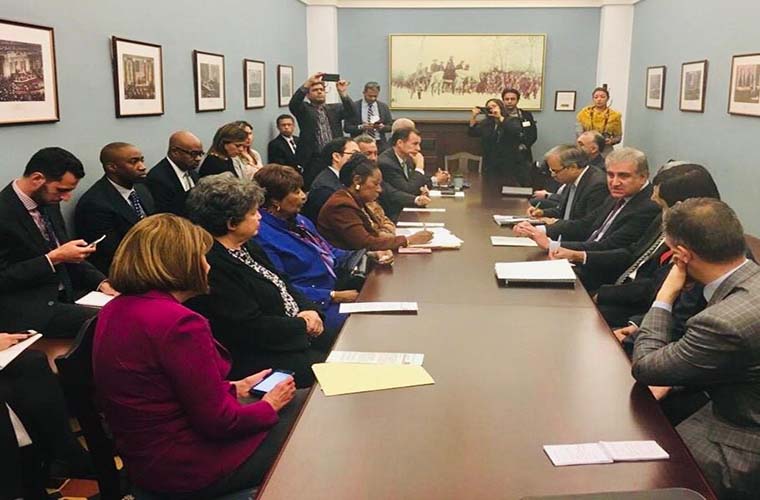 FM Qureshi calls for strengthened Pakistan US legislative bodies linkages.
He said this, while speaking at a ceremony in Capitol Hill, which Pakistan Caucus of United States Congress hosted for Foreign Minister Shah Mahmood Qureshi.

He underscored the significance of further strengthening people-to-people and inter-parliamentary linkages between the United States and Pakistan.
During the interaction, Foreign Minister also referred to Pakistan’s policy that always valued its partnership with the United States.
He also briefed members of Caucus on the latest situation in India-Occupied Jammu and Kashmir and continuing Indian repression of the Kashmiri people.
Shah Mehmood briefed the Caucus about government of Pakistan’s vision for socio-economic progress and human development in the country.
Furthermore, he briefed them on Pakistan’s efforts for regional peace and prosperity including facilitating peace in Afghanistan. Besides, he apprised them of Pakistan’s role in defeating terrorism in the region.
Meanwhile, the members of Pakistan Caucus appreciated Pakistan’s invaluable contributions for regional peace and security.

Foreign Minister of Pakistan visits US and UN

Earlier, he raised case of Kashmir at UN headquarters.
Shah Mahmood Qureshi met UNSG and UNSC president.
While talking to the media in New York, he cited discussion on occupied Jammu and Kashmir situation in UN Security Council. He said it once again affirmed Kashmir an internationally recognized dispute.

Moreover, he called for final disposition of the outstanding dispute in accordance with the UN Security Council resolutions and the popular aspirations of Kashmiri people.
Pakistan remains gratified that the Security Council has once again considered the situation in occupied Jammu and Kashmir.