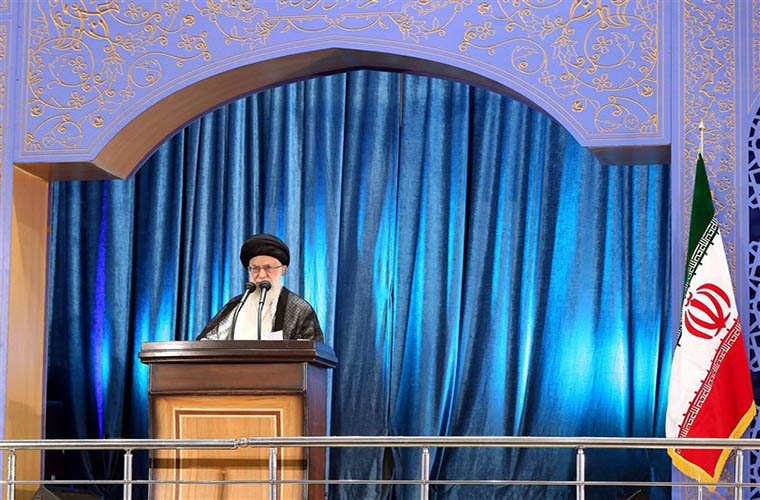 Ayatollah Khamenei says US superpower image broken due to IRGC retaliatory missiles attack at Ain al Assad.
The Supreme Leader of Iran Ayatollah Seyyed Ali Khamenei said this during sermons he delivered at Friday prayers in Tehran today.
According to Irna, Supreme Leader of the Islamic Revolution said that the day the IRGC missiles attacked the US bases, it was a major blow to the US because it broke its image as a superpower.

A huge number of people attended the Friday prayers in Imam Khomeini Mosalla (prayers ground).
Ayatollah Khamenei further said the Zionist news and media propaganda machine made every effort to link the name of the grand martyred commanders with terrorism in the days before and after their assassinations.
He said that the US president and state of state focused on this notion and the Zionist news machine all across the world repeated the same allegations.

But he pointed that the God Almighty changed things to just the opposite of what they wanted.

Moreover, he said that people not just in Iran but in other countries came out in reverence of the martyred Iranian commander and set the US and Zionist regime flags ablaze.

He further said that all this reveals the hand of God in work.
Ayatollah Khamenei said that Iran experienced two weeks of extraordinary happenings. He said that Iran successfully foiled the Zionist media plots that aimed to distort realities about the assassination of the IRGC commander Lieutenant General Qasem Soleimani.
Meanwhile, the Supreme Leader also hailed the massive turnout of the Iranian nation in the funeral procession for the IRGC grand commander Lieutenant General Qasem Soleimani.
The US forces assassinated Soleimani in illegal airstrikes in Baghdad on Jan 3, 2020.
Furthermore, he said that it marked a day when millions of people in Iran and hundreds of thousands in Iraq and some other countries took to streets to register the biggest public ceremony in the world to their names.
Ayatollah Khamenei said that was a day that belonged to God.
The day when IRGC’s missiles hit the US base is another day of God. These two days are turning points in the history and are not ordinary days, he said.
That a force of a country was able to slap the biggest bullying power in the face reveals the powerful hand of God, he said.
He also said divine help lies in piety and urged all to observe piousness in every affair.

The entire world attaches importance to his sermon today because of heightened US Iran tension.

Iranian nation seems to have united after the assassination of Lt Gen Qassem Soleimani in illegal US airstrikes in Baghdad.

Although Iranian retaliatory missiles hit US base in Ain al Assad Iraq, Ayatollah Khamenei termed it a slap.

He downplayed the retaliation as a slap while separating it from the answer that Iran will give in reaction to the assassination.

US comes under mounting pressure from Iran and Iraq to leave