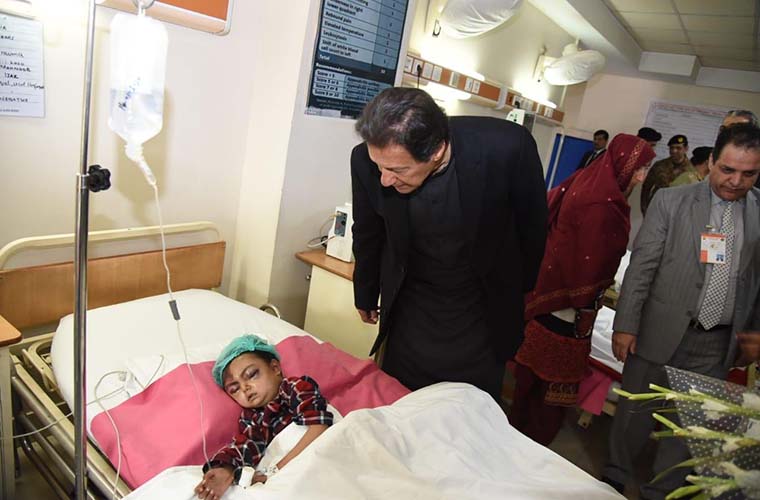 Prime Minister visits Muzaffarabad to review situation after casualties due to snow-slide in Neelum Valley.
Imran Khan also paid a visit to CMH and inquired about the health of those injured.
The injured victims remain under treatment there.
PM Khan reviewed the latest situation after snow-slide incident.

The Chief Secretary AJK briefed the Prime Minister regarding damages incurred due to snowfall and avalanches.
He also briefed him about the relief efforts.
The Prime Minister directed the hospital administration to provide better medical facilities to the injured.
Furthermore, he asked them to also arrange medical teams visit in the affected areas.
In his detailed briefing to the Prime Minister, the Chief Secretary Azad Kashmir, Mathar Niaz Rana said that rescue and relief activities are continuing.
Government continues relief activities in the rain and snow-hit areas of Azad Jammu and Kashmir.
Meanwhile, four helicopters took part in rescue and relief operations. Rescue teams shifted injured to Kail Sharda and Muzaffarabad.
Work on reopening of roads in the affected areas continue on war footings while they are providing food and other necessary items to the affected people.
Moreover, the Chief Secretary informed that they would pay Rs150,000 to the heirs of each died person, Rs75,000 to the handicapped, while Rs50,000 to the injured people.
Besides, government will pay Rs100,000 for each damaged house, Rs100,000 for each damaged vehicle and Rs50,000 for each damaged shop.
However, they will do this in under first phase.
Meanwhile, Chief Secretary also invited the attention of the Prime Minister to setup two utility stores at Neelum valley and construction of a by-pass.
President AJK Sardar Masood Khan and Prime Minister AJK Raja Farooq Haider Khan also attended the briefing.
Besides, Minister for Kashmir Affairs Ali Amin Gandapur, Speaker Legislative Assembly, Corps Commander Rawalpindi, GOC Murree and other high ranking civil and military officers also remained present.