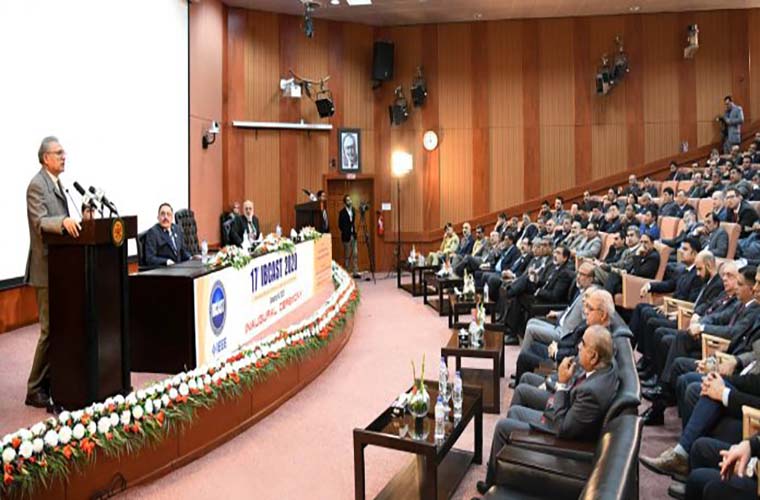 Pakistani scientists urged to excel in the fields of science and technology. President Dr. Arif Alvi has urged them to excel to compete with the world.

He said this while addressing the 17th International Bhurban Conference on Applied Sciences and Technology. The event held in Islamabad today.

He further said science and technology are evolving on daily basis and we have to keep upgrading ourselves.

He termed new technology as a dual-edged sword.

President said science opens up opportunities but it requires a responsible use of it as well.

He said Pakistan, having a belligerent country on its eastern border, had to have its nuclear deterrence.

He said Pakistan can make great progress in the field of sciences because knowledge available to us is vast and comprehensive.

Moreover, President called for collective action from the world to reduce the effects of global warming.

Meanwhile, he also spoke on cybercrime. However, he called it a matter of deep concern for everyone as the issue is universal and threatens everyone.

Notably, China has conferred the China International Science and Technology Cooperation Award for the year 2020.

The ceremony held at The Great Peoples Hall in Beijing on Friday.

Prof. Dr. Attaur-Rahman has received this award in recognition of his contributions in the field of chemistry.

Besides, he received award for the numerous strong collaborations that he has developed with China.

He made collaborations in the fields of organic chemistry, genetics, pharmacology, agricultural sciences, virology, nanotechnology and other emerging areas.

Death toll from boiler blast in Karachi factory rises to 10