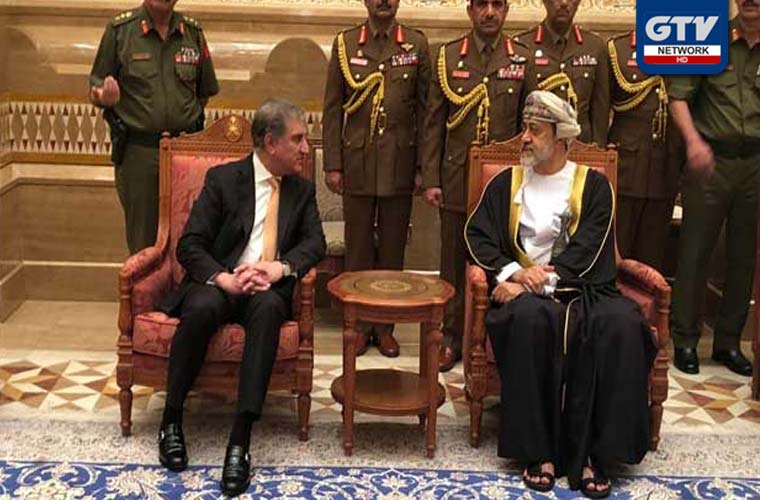 The Foreign Minister conveyed special messages from the President and the Prime Minister of Pakistan to him.

President and PM stressed that the Pakistani nation fully shared the grief and sorrow of the brotherly people of Oman on this irreparable loss.
However, FM stated that with the passing away of Sultan Qaboos, Oman has lost a wise and sagacious ruler and a visionary leader
Furthermore, he praised Sultan Qaboos for transforming Oman into a modern, vibrant and prosperous state.
Moreover, he said his contributions to the cause of peace, stability and security in the region will be long remembered.

Oman will continue to prosper

Foreign Minister expressed the confidence that Oman will continue to prosper in line with the vision of Sultan Qaboos.
Sultan Haitham expressed sincere thanks to the leadership and people of Pakistan.
Specially, he thanked on the gesture of Foreign Minister’s special visit to Muscat to offer condolences.

While noting the long-standing fraternal ties between Oman and Pakistan, Sultan Haitham affirmed that these relations will continue to flourish in the time to come.
Pakistan has always maintained close brotherly relations with Oman.
Under the leadership of Sultan Qaboos, bilateral cooperation acquired a new level.
Sultan Qaboos was a sincere and trusted friend of Pakistan, and made an invaluable contribution to bringing the two countries and peoples closer.

In posts on their Twitter accounts on Saturday, Omani newspapers Al Watan and Al Roya reported it.

They broke the story that Minister of Heritage and Culture Haitham bin Tariq was taking the oath of allegiance as sultan.

73 deaths in PIA plane crash confirmed while others injured critically