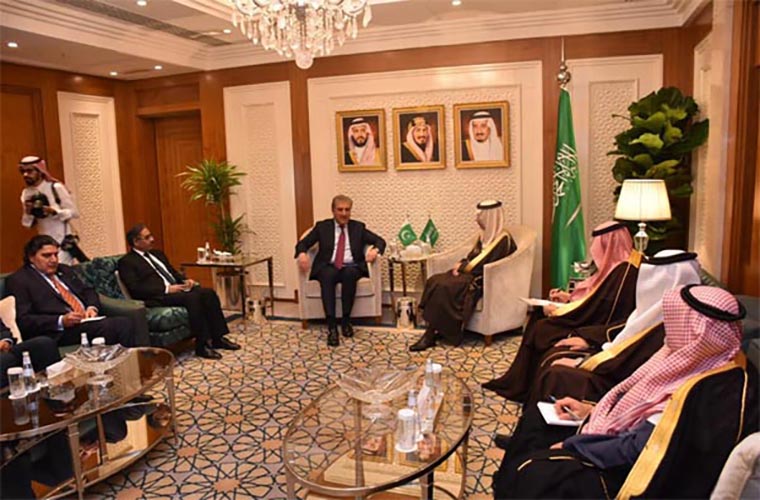 As part of his trip to regional countries on the direction of Prime Minister Imran Khan, Foreign Minister Shah Mahmood Qureshi visited Riyadh on 13 January 2020.
He had an in-depth exchange of views on recent developments with Saudi Foreign Minister Prince Faisal bin Farhan Al Saud.

During the meeting, they also discussed bilateral matters.
The Foreign Minister underscored deep-rooted and multi-faceted fraternal ties between Pakistan and Saudi Arabia.
He also referred to growing strategic relationship between the two countries in myriad dimensions.

He highlighted the thrust of his diplomatic outreach as part of Prime Minister’s direction.
FM told Saudi counterpart that PM Imran Khan directed Pakistan must support all efforts aimed at avoiding conflict and resolving differences and disputes through political and diplomatic means.
Furthermore, he apprised his Saudi counterpart about his telephonic conversations with the Foreign Ministers of regional countries.
He also shared with him other diplomatic contacts, noting an overwhelming level of support for efforts for de-escalation.
While noting the serious implications for peace and security of recent events, he stressed the need for all sides to exercise maximum restraint.
Besides, he emphasized to avoid taking any further escalatory step, work for defusing tensions, and finding ways for constructive engagement.

As “partner for peace”, the Foreign Minister stated, Pakistan would support all efforts for peace and provide all possible facilitation for constructive engagement among parties.
The Foreign Minister also thanked for Saudi Arabia’s steadfast support for the Kashmir issue.
He also exchanged views on deepening bilateral cooperation in economic and financial fields.
The Saudi Foreign Minister reaffirmed the strategic importance of Saudi-Pakistan relations and the resolve to deepen mutual cooperation in all fields.
In the regional context, the Saudi Foreign Minister welcomed the Foreign Minister’s visit.  He welcomed Pakistan’s support for efforts to defuse tensions, preserve peace and security, and help find a diplomatic way forward.
The two sides agreed to remain engaged and consult closely on issues affecting peace and security in the region and beyond.