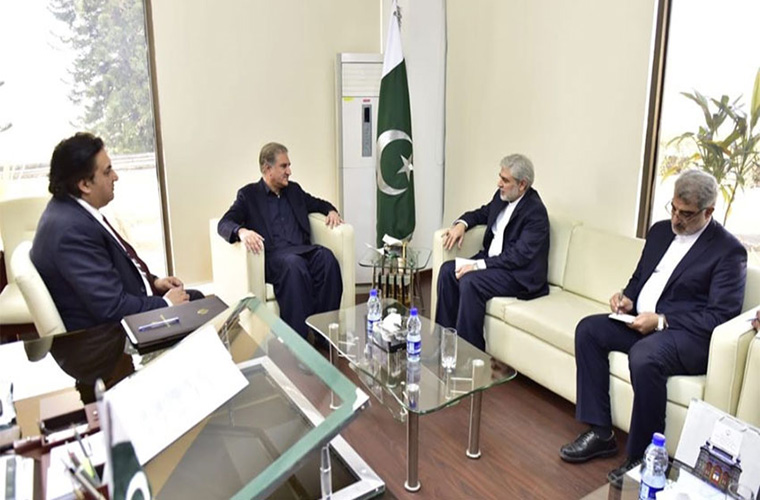 He reaffirmed Pakistant’s positive role to reduce tension in the region.

Foreign Minister Shah Mahmood Qureshi emphasised that growing tensions do not benefit anyone in the region.

He further said that he stays in touch with various foreign ministers of the region.

He also said he will be visiting Iran and other countries very soon.

Shah Mehmood shared that he would do so according to special direction of Prime Minister Imran Khan
He greeted and welcomed the ambassador for his appointment in Pakistan.

Iranian Ambassador thanked Foreign Minister and assured that he will use all his efforts to further expand bilateral relations between the two countries.

Shah Mehmood Qureshi made a telephonic conversation with Russia Foreign Minister Sergei Lavrov.
After that, Pakistan government media reported Pakistan and Russia have agreed to launch joint efforts for restoring peace in the region. It noted rising tensions between the United States and Iran.
Foreign Minister Shah Mahmood Qureshi and his Russian counterpart Sergei Lavrov discussed the overall situation in the region.
Specially, they also discussed issues relating to rising tension in Middle East.
Qureshi informed his Russian counterpart that an increase in tensions among the states could dent a severe blow to peace and stability in the region.
He said both sides have to show restraint in order to overcome the current escalated situation.
While reiterating Pakistan’s principled stance, he made it clear that Pakistan will neither become a party to any new conflict in the region. And nor will allow use of its land against any regional or neighbouring country.
The two Foreign Ministers also agreed to make joint efforts for regional peace.