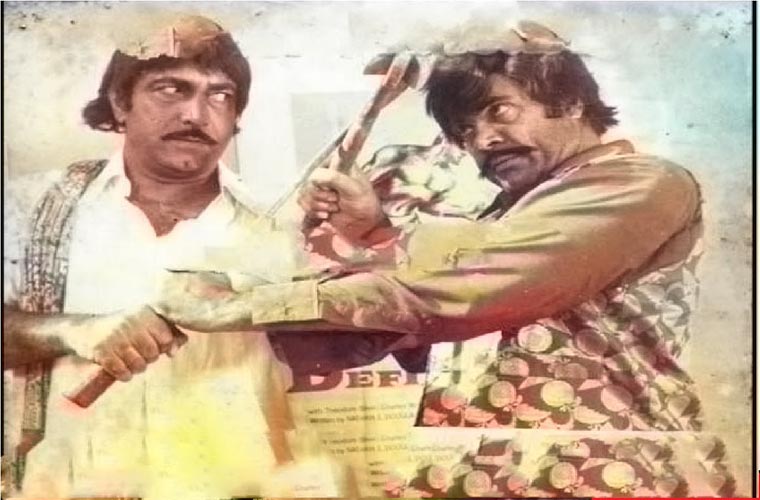 Mustafa Qureshi praises Sultan Rahi as king of action and expressions. Legend and pride of performance artist, Mustafa Qureshi paid homage to the late Sultan Rahi.
On Sultan Rahi’s 24th death anniversary, veteran actor recalled loudism of king of actions and expressions Sultan Rahi.
While talking to APP, Qureshi also recollected his low tone in films as one of the main reasons for his super-hit movies.
He noted people in the country and abroad like Mr Rahi due to his loud voice in action films.
Interestingly, both co starred in many movies. The contrast of loud and low tones won them great appreciation from their fans.

Furthermore, he referred to seniority of Rahi sahib when he performed in “Jailer tay Qaidi.
However, the great artist extended complete cooperation with him.

“Char khoon day piyase” was his first Punjabi film, he said.
He added that in the beginning of the career in film industry he acted in Urdu films. Because, Punjabi is not his mother tongue.
Mustafa Qureshi remembered Sultan Rahi not only a tremendous artist but a fine human being.
He said Rahi worked free of charge for financially poor directors beside him.
Rahi Sahib and he had much understanding in action films that’s why, non of them hurt each other while filming scenes.
However, once he received injuries during director Hassan Askari’s film shooting, Sultan Rahi got much disturbed. Instantly, he hugged him.

Acclaimed actor recalled that Mr Rahi performed in over 800 films.
The Nigar award winner actor used to start shooting at 7 am to 3 am next morning and he had to stand by him for it.
Mustafa Qureshi said that Sultan Rahi was a kind hearted and religious person who had performed several Umrah and hajj.
He recalled pairing with Sultan Rahi was considered guarantee of super-hit Punjabi films.

Scintillating performer Ghulam Mohiuddin said that Sultan Rahi won great place in the film industry with hard work and labour.
He said that change was the only constant thing in this universe, adding that Pakistani cinema witnessed these changes in Sultan Rahi’s era after acclaimed punjabi hero Lala Sudhir.
Replying a question, he said that criticism on Sultan Rahi’s loudism was out of place because the critics themselves didn’t know how about it.
Moreover, he paid glowing tribute to Pakistan’s “Clint Eastwood” whose carrier spanned over four decades.
In  those decades, he had acted in 703 Punjabi and 100 Urdu films.
Sultan Rahi bagged 160 awards in his carrier for the best performance.
Although his real name was Sultan Muhammad Khan, fans revere him as Sultan Rahi.
His assassination on January 9, 1996 in Gujranwala created a vaccuum in film industry.
GTV

Bruce Willis to retire from acting due to cognitive disease