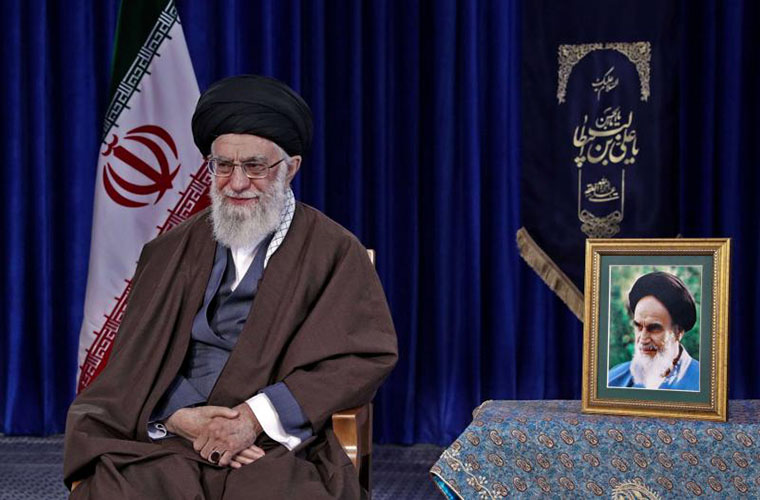 Ayatollah Khamenei terms Iran missile attack a slap and not revenge. Leader of the Islamic Revolution Ayatollah Seyyed Ali Khamenei said while addressing people of Qom in Tehran.
He called Iran’s early Wednesday missile attack on US bases in Iraq following the American assassination of a top general was just a slap.

To him the talk of revenge and such debates a different issue. But, for now, Iran delivered a slap on their face last night.
Ayatollah Khamenei’s speech broadcast live on national television Wednesday.

The remarks came hours after Iran responded to the US assassination of the Middle East’s most prominent anti-terror commander General Qassem Soleimani and Iraqi Abu Mahdi al-Muhandis with a barrage of missiles that hit two US bases in Iraq.
Ayatollah Khamenei said Iran is quite equipped in the face of the global bullying powers. “It is a very blatant mistake that some people think if they take a step back, the Americans will stop their hostility.”
“Some people say and even write in newspapers that we should act so that America does not get angry; this is absolutely wrong. This is contrary to the Qur’an commandment,” the Leader added.

Khamenei calls US and Israel as enemies

Ayatollah Khamenei said the overriding responsibility of the masses is to discern their enemies. “I am firmly saying that the enemy is America, the Zionist regime and the arrogant apparatus of corporations and institutions.”
They have brought war, sedition and destruction to the region and “wherever they have put their foot on,” the Leader said.

“This must end. This region does not accept the American presence. Governments emanating from their people do not accept this,” he added.
Ayatollah Khamenei said the Americans “are now adamant about dealing the same corruption and destruction against the dear Iran and the Islamic Republic.”
“They keep insisting on negotiation, but these things are a prelude to intervention,” he said.
The Leader hailed the Iraqi parliament’s decision ordering US troops to leave the country as well as the Iranian parliament’s blacklisting of American forces as terrorists.

“This measure by the Majlis was a very good blow. The Iraqi parliament’s act for the expulsion of America from Iraq was also very good. May God help them continue this path.”
“The Americans want Iraq to be like the former idolatrous regime in Iran or Saudi Arabia today – a region full of oil to be under their control so they can do whatever they want – a milking cow in the words of that individual,” Ayatollah Khamenei said in reference to US President Donald Trump.
“But the faithful elements and the Iraqi youth and their Marja’iya (religious authorities) stood up to these scenarios and Haj Qassem assisted this vast front in the capacity of an active adviser and an honorable supporter,” the Leader added.

The US, Ayatollah Khamenei said, has similar plans for Lebanon. “The Americans want to clear Lebanon of the most important factor of independence which is the resistance so that it cannot resist.”
However, “thank God, Hezbollah has become stronger day by day and today, both Lebanon’s hands and eyes are Hezbollah and the role of our martyr [Gen. Soleimani] is paramount and outstanding,” the Leader added.
Ayatollah Khamenei said some of the “hated regimes in the region which say things from time to time against us are not our enemy as long as they do not act against the Islamic Republic” in collaboration with Iran’s enemies.
The Leader also said the US assassination of Gen. Soleimani served the Islamic Revolution. “His martyrdom showed to the world the Revolution is alive, just when some were trying to insinuate that the Revolution has died in the country.”

“You saw what happened in Tehran and other cities,” Ayatollah Khamenei said, referring to several million people who came out to pay homage to Gen. Soleimani in the Iranian capital, Ahvaz, Mashhad, Qom and Kerman.
“Enemies felt humiliated in the face of this glory even though they may try to conceal it,” he said. “The lying Americans who are not worthy of being valued tried to portray this brave man as a terrorist but the Iranian nation punched them in the mouth.”
General Soleimani, the Leader said, thwarted American plans in Iraq, Syria, Lebanon and the Palestinian territories.
“The Americans’ plan for Palestine was to confine the Palestinian cause to oblivion and for the Palestinians not dare to speak of their struggle. This man had the Palestinians’ hands filled.

US considers reducing functionaries in Kabul due to security concerns