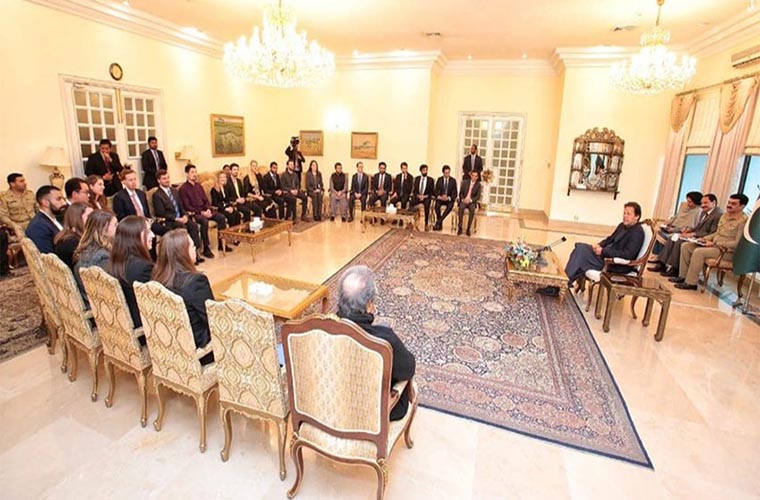 Khan said this, while talking to a delegation of Virginia University in Islamabad today.

He said that regional peace faces threats due to the Indian government’s policies based on RSS-ideology.

Furthermore, he said that the identity of Indian people themselves has been threatened by the Indian government’s fascist policies.

PM Khan strongly condemned the curfew continuing in occupied Kashmir for over 150 days.

He said This tyranny of the Indian government has exposed its claims about democracy.

He further said that incumbent government considers them as equal citizens of the country.

About economic situation in the country, the Prime Minister said economy has been stabilized owing to the strenuous efforts of the PTI government.

Moreover, he also noted a clear improvement in the economic indicators.

He said the government is making efforts to introduce a uniformed education system. That aims at eliminating the social division.

Meanwhile, Pakistan has strongly rejected as fabrication the Indian propaganda about treatment of minorities.

According to Foreign Office Spokesperson Aisha Farooqui’s statement, the BJP government’s mischievous portrayal of isolated law and order incidents in Peshawar and Nankana Sahib as alleged ‘persecution’ of minorities is part of its smear campaign against Pakistan.

She described it a desperate attempt (of India) to divert attention from the ongoing state terrorism in occupied Jammu and Kashmir.

According to her, India also wanted to deflect public attention from systematic discrimination against minorities in India.

The statement said Pakistan completely rejects these fabrications, which will in no way shield the BJP government from opprobrium by the international community on its illegal actions in occupied Kashmir and the adverse fallout of the discriminatory Citizenship Amendment Act and National Register of Citizens.

The Spokesperson said Pakistan attaches the highest respect and sanctity to all places of worship, including those belonging to Sikh religion.