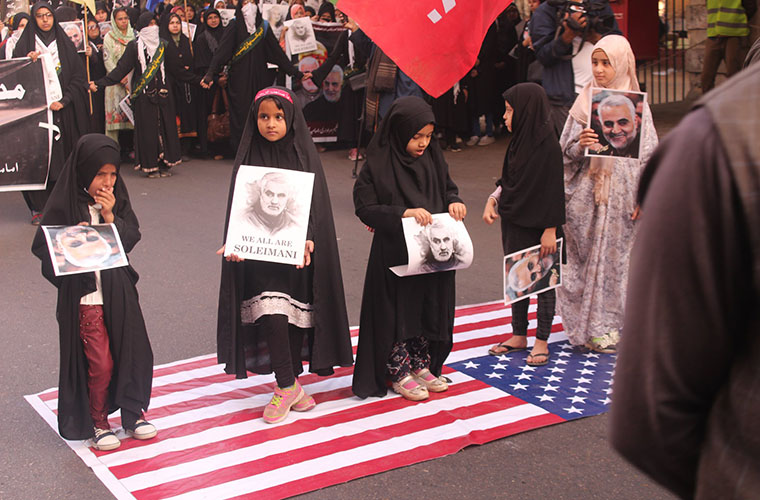 From Karachi to Islamabad, Pakistanis said that Baghdad airstrikes made them to recall that United States had killed Pakistan Army soldiers in similar unlawful strikes, including Salala Tragedy.
Tens of thousands of supporters took out a rally from Karachi Press Club to the U.S. Consulate where they handed over a memorandum of protest.
Amid slogans in support of Haj Qassem and Iraqi commander Abu Mahdi Mohandis, they also raised slogans against US illegal strikes and meddling into affairs of Iraq and other nations.

Allama Amin Shaheedi, Allama Hassan Zafar Naqvi, Allama Ahmed Iqbal Rizvi, Allama Baqir Zaidi, Allama Nazir Taqvi, Allama Sadiq Raza Taqvi,
Many speakers turned down the false allegations and lame excuses of US President Trump. They said that Trump administration was fighting as proxy for Zionist Israeli Lobby.
However, they reminded the world that Arabs and Muslims mourn the martyrdoms of their great heroes from Gaza in Palestine to Karachi to Islamabad in Pakistan, let alone Iraq or Iran.
Meanwhile, the Karachi protest leaders handed over their memorandum of protest to the Ambassador of United States to Pakistan through Consul General (US consulate Karachi).

Following is the full texts of that memorandum:

Ambassador of United States to Pakistan
through Consul General (US consulate Karachi)
On behalf of Pakistani nation, we take out a peaceful protest rally to share our reaction to illegal and unlawful US attacks on sovereign nations.
Please convey this to the US government, including principal officials and institutions.  Please share it with Capitol Hill, White House, Department of the State and Pentagon.
Pakistani nation has strong reasons to condemn illegal US airstrikes in sovereign countries, specially the latest airstrikes in Iraq.
Great nation of Pakistan may recall illegal US airstrikes that killed Pakistan army soldiers in Salala and other incidents. Pakistanis also recollect Raymond Davis case. Pakistanis cannot forget that prior to US proxy war against USSR in Afghanistan, there was no Al-Qaida. Prior to US invasion in Iraq, there was no ISIS (Daesh).
This shows a link between these notorious terror outfits and US agencies. Former British official Robin Cook on record said al-Qaida was product of “miscalculation” of Western intelligence agencies.  Former US Secretary of State Hillary Clinton on record admitted US role.
History is replete with unlawful US attacks that killed civilians in Pakistan, Afghanistan, Iraq and Iran, let alone military officials.
Therefore, we may feel the pain of great Muslim nations of Iraq and Iran in the wake of brutal unlawful use of force in Iraq.
Top officials of Iraq government and National Security Council have condemned the US airstrikes as unlawful and in violation of Iraq’s sovereignty.
The entire world witnessed state funeral of the great martyrs in Iraq and huge public turnout in Iraq and Iran on 4th January and 5th January (today). That means great nations of Iraq and Iran revere the victims of unlawful US airstrikes as their heroes.
This shows legitimacy of Iranian role in Iraq. This shows legitimacy of Hashd al Shaabi or Popular Mobilization Forces of Iraq.
Incontrovertible fact has it US has imposed an illegal war on Iraq. Then UN Secretary General Kofi Annan had also declared its illegality in 2004. He referred to UN charter for US war’s illegality.
We condemn US unlawful wars and airstrikes. We condemn the targeted assassinations of Iranian General Qassem Soleimani, his comrades and Iraqi Hashd al Shaabi commanders, including Mohandis Abu Mahdi.
Hashd al Shaabi comprises of sons of soil. Haj Qassem Soleimani and other IRGC personnel were formally invited by Iraq government.
We express sympathy with the heirs of great martyrs. We express solidarity with Iraq and Iran.  We condemn unlawful attacks of US against humanity.
Our message to power that be in Washington DC: Pay attention to facts instead of issuing false statements.  Let alone Arabs or Muslims, even Japanese and South Koreans hate US military bases. They have registered protest. So, this is the answer why world hate.
We don’t hate American people but it is U.S. administration that perpetrated crimes against other nations that made other people to just reaction
From Operation Ajax to Operation Mongoose, there is a history of US unlawful meddling into internal affairs of sovereign nation-state and creating false justification to intervene. The post 9/11 threats to Pakistan also remain part of history.
Summarily, from Karachi in Pakistan to Gaza in Palestine Muslims and Arabs mourn the deaths of heroes of Islamic and Arab world. Streets condemn US administration for unlawful attacks.
We demand U.S. Congress and judiciary to hold the perpetrators of these crimes accountable.
We appreciate those Americans who gathered last night outside White House and demanded US troops withdrawal.
We also appreciate those politicians and former officials who have opposed Trump administration over this uncalled for and unjustifiable strike. However, we urge that Americans as a nation need to do more.  You must not allow this administration to violate sovereignty of other nations and assassinate officials and citizens of other nations on false excuses in their name.
Besides, we also demand United Nations Security Council must act and take punitive measures against U.S. administration. (Ends).
GTV