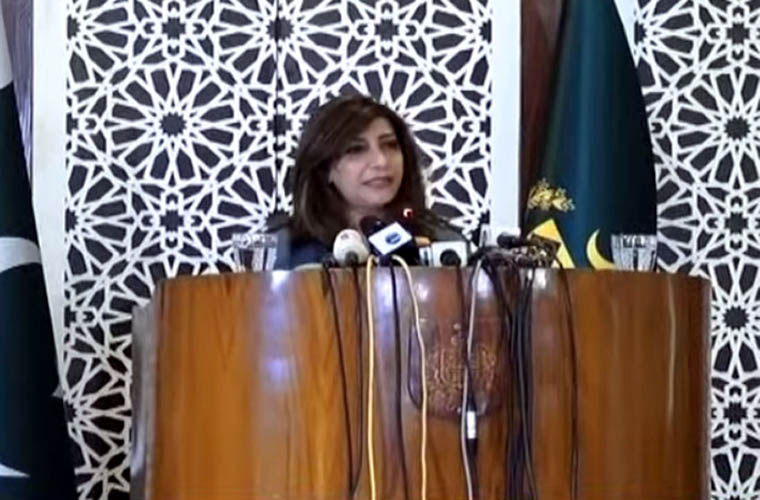 Pakistan urges international community must raise voice for the Kashmiris. Foreign Office Spokesperson Aisha Farooqui said, while addressing weekly news briefing in Islamabad today (Thursday).
She emphasised that the international community must express concern and raise voice for the Kashmiris.
She lamented that Kashmiris were facing complete communications blackout since India’s illegal actions of August 5, 2019.

The FO spokeswoman asked the countries having belief in human rights to take notice of it.
The plight of the people of occupied Kashmir increased manifold due to curfew for 151 days.
However, she reiterated Pakistan’s pledge to continue highlighting the case of the Kashmiris.
Pakistan continue to raise it at every international forum until they get their right to self-determination.
The Spokesperson said Pakistan calls for immediate lifting of the curfew, restoration of internet and release of political prisoners.
Furthermore, Pakistan demand permission to international observers to witness the situation on ground in India-occupied Jammu and Kashmir.

Dr Aisha said Pakistan has been facing challenges along on the Line of Control in the shape of India’s frequent unprovoked ceasefire violations.

Moreover,  she also referred to India’s heavy deployment of weapons there.
She said Pakistan has shared its concerns about it with the United Nations and international partners.
The FO spokeswoman also cited 7th letter which foreign minister recently wrote to the president UNSC.
The FM Shah Mehmood Qureshi apprised him of the situation prevailing alone of the LoC.
While answering a question regarding possibility of a special session of the OIC on Kashmir, she said work under way in this regard.
She said that Pakistan desires the next regular session of the Organization of Islamic Cooperation takes place in Islamabad.
While answering another question about visit of Abu Dhabi’s Crown Prince she said Pakistan and the UAE enjoy deep and wide relationship.
The two sides discuss the entire gamut of bilateral ties during the visit for further enhancing bilateral cooperation.
To a question about the Afghan peace process, Aisha Farooqui said Pakistan played a positive role in the Afghan peace talks. Pakistan sesires an early settlement in the Afghan issue.
Besides, Dr Aisha said Pakistan will continue facilitating the peace process in Afghanistan.