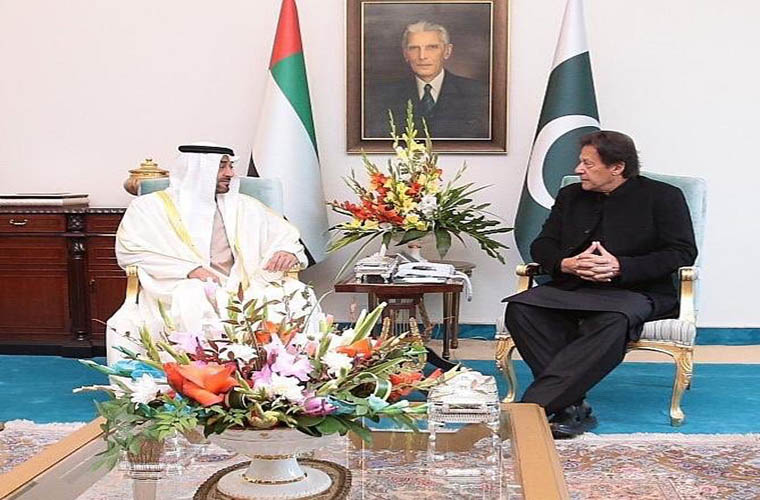 Traditionally attired two children presented bouquet to him. He became first foreign dignitary to visit Pakistan in the new year.
The visit aimed to meet the leadership and discuss the bilateral and regional matters.
A high-level delegation also accompanied him during this second visit.
First, he had last visited the country in January last year.
The crown prince had a one-on-one meeting with the prime minister.
PM Khan hosted a luncheon for the guest.
During the meeting, the leadership exchanged views covering bilateral matters. They also discussed regional and international issues of common interest.
According to Prime Minister’s office: Prime Minister Imran Khan and Sheikh Mohamed bin Zayed held wide-ranging talks focusing on bilateral, regional and international issues.
Furthermore the discussions continued over the luncheon PM hosted in honour of the Crown Prince and his accompanying entourage.

Prime Minister underlined the strategic importance of the Pakistan-UAE special relationship. He stressed the imperative of deeper economic engagement.

Furthermore, he highlighted the economic turn-around in Pakistan and the growing opportunities for foreign investment. He also underscored fruitful trade and commercial engagement with key partner countries.
While welcoming the UAE’s interest in investing in myriad sectors in Pakistan, he assured maximum facilitation for UAE investments.
Among others, he higlighted possibilities in the energy and tourism sectors. The Prime Minister underlined closer collaboration in the Small and Medium Enterprises (SMEs) sector as well.
The Prime Minister highlighted the positive contributions of more than 1.6 million expatriate Pakistani community. They considers UAE as their second home.

Apprising India’s inhuman lockdown in the Indian Occupied Kashmir, continuing for over 150 days he highlighted India’s discriminatory Citizenship Amendment Act and the National Register of Citizens and their negative consequences.
He underscored the need for the world community to take urgent steps to address India’s state oppression in Indian Occupied Kashmir immediate removal of the continuing lockdown and other restrictions, avoidance of escalation of tensions on the LoC, and peaceful resolution of the Jammu & Kashmir dispute in accordance with the UN Security Council resolutions.
He also apprised of Pakistan’s efforts and positive contribution to the Afghan peace and reconciliation process. The Prime Minister underlined that a peaceful, stable and prosperous Afghanistan was in the interest of Pakistan and the region.
The Crown Prince underlined the strategic importance of UAE- Pakistan relations and extended cordial greetings for the brotherly people of Pakistan and good wishes for their accelerated development in the year 2020 and beyond. He also underlined UAE’s support for peace and stability in South Asia and peaceful resolution of issues.
Earlier, in a special gesture, the Crown Prince was received by Prime Minister Imran Khan at the Nur Khan Airbase.
According to Foreign Office, the frequent exchange of high-level visits between Pakistan and the UAE remain reflective of the importance that the two countries attached to their fraternal ties.
The crown prince’s visit would also contribute to further enhancement of multi-faceted Pakistan-UAE collaboration.
For Pakistan, UAE remains a major source of investment and largest trading partner in the Middle East.
The UAE is also among Pakistan’s prime development partners in education, health and energy sectors.
Moreover, it hosts more than 1.6 million expatriate Pakistani community.
The community contributes remittances of around $4.5 billion annually to the GDP.
GTV

National Security Committee will discuss the latest situation in Afghanistan