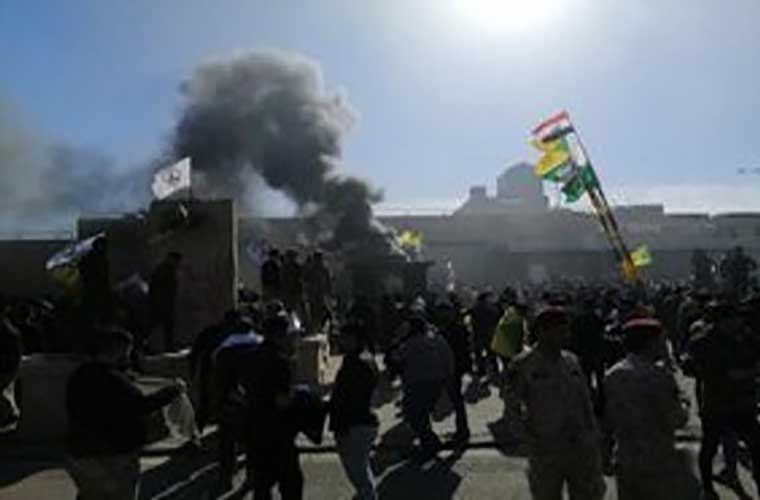 Iraqis storm US embassy in Baghdad to protest against airstrikes. US diplomatic staff evacuated prior to partial arson at outer wall of the building in Green Zone.

Latest report from Iraq had it that  Defence Ministry denied Minister Najah Al-Shammari’s visit to the American Embassy building.

However, the Embassy called on American citizens not to approach the Embassy building.
According to its press release: “Because of the ongoing protest activity, US citizens should not approach the US Embassy.”
It further said that Americans should review their personal security and prepare for them in emergency situations. National News Agency reported it.

Iraqis storm US embassy in Baghdad

Funeral of the slain volunteers held in Baghdad today. Soon after that, Iraqis rushed to Baghdad embassy of US.

While carrying flags and placards, they were raising slogans. They were demanding US to leave Iraq.

US airstrikes had killed at least 25 PMU volunteers belonging to Kataib Hizbullah. US official termed it a response to attack on US bases in Iraq.

How Iraq reacts to US airstrikes

Meanwhile, Washington Post reported that at an emergency session of the Iraqi National Security Council, ministers and security officials described what they called a “grave violation” of rules governing the presence of U.S. troops in Iraq.
According to a statement issued after the meeting, Iraq will revisit the status of U.S. troops in the country.
The Post further reported that Iraqi President Barham Salih also expressed his opposition to the strikes in a telephone call with the U.S. Embassy, calling them “harmful to Iraq and . . . unacceptable.”
GTV