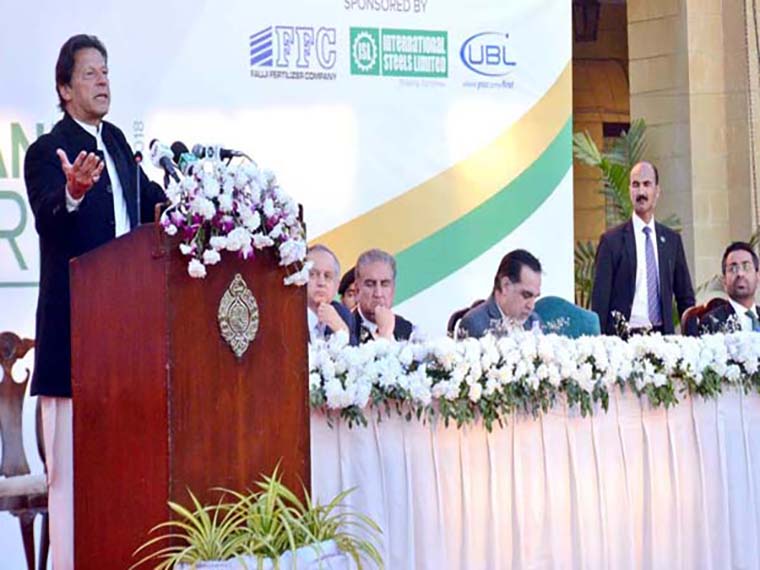 PM highlights importance of traders and investors in making Pakistan strong economically and turning into a welfare state  as per vision of founding fathers.

However, PM Khan said the government would extend all possible facilities to the business community in that respect. He referred to Prophet Muhammad (Peace Be Upon Him) also a trader.

FurtherfReferring to the fear of any action or probe of he National Accountability Bureau (NAB) against traders, the prime minister said the government had promulgated an ordinance, insulating the businessmen from any NAB action.

“Our contention is that NAB’s job is to hold the scrutiny of public office-holders. For the scrutiny of businessmen, there are other institutions, including the Federal Board of Revenue (FBR),” he said.

He congratulated the business community on this development.

The prime minister said the vision of Pakistan, which was also provided in the Objectives Resolution, was based on the principles of Madina State.

The two basic fundamentals of that vision, he said, were compassion and justice. Any country could be turned into an independent and great nation by following the two principles.

The State of Madina, which was run on those two basic fundamentals, defeated the two superpowers of that era and transformed the Muslims into a great nation that ruled the world for 700 years, he added.

The prime minister said the same vision provided a direction and road-map to achieve the objectives of Pakistan’s creation, and the businessmen and traders had an important role in that regard through wealth creation.

He cited a modern era example of China, which focused on trade and wealth creation, and lifted 700 million people out of poverty in 30 years. The government’s job was to facilitate and the traders had to focus on wealth creation, he stressed.

The prime minister said the present government during the last one year alone had got the country improved in terms of ease of doing business in the world by 28 points as against the previous government’s 2013-18 tenure when Pakistan was put on the brink of economic and institutional collapse.

Rejecting the criticism over him for referring the past situation, he said his government did not inherit the economy of Sweden, rather the country was faced with the situation of Rs 30 trillion loans.

Imran Khan said besides presenting his government’s performance before the nation, he would continue to remind the people of past economic situation over the next four years.

Assuring the traders of more steps for ‘ease of doing business’, Prime Minister Imran Khan said if the businessmen and investors prospered, the country would flourish, and achieve economic growth and development.

He said the introduction of socialist system, though it was better in terms of welfare of masses, in 1960s changed the mindset and profit-making was considered as a bad thing.

“There is a difference between profiteering and profit-making,” he said, adding, his government was changing that mindset to attract the investors.

The prime minister said 2019 was a difficult year for the government, which despite the challenges of depleting foreign exchange reserves, pressure on rupee, repayment of $ 10 billion loans and fear of default, stabilized the economy.

But now with the incentives for industry and specially focusing on the revival of Small and Medium Enterprises (SMEs), 2020 would be the year of growth and jobs creation through encouraging investors, he added.

Imran Khan referred to a report of the United Kingdom based Conde Nast magazine, which listed Pakistan as a top travel and tourism destination, and stressed on the need of exploring and exploiting that huge potential.

Only the Northern Areas of Pakistan were double in size than Switzerland that earned $ 80 billion per annum from tourism he said, adding Pakistan having historic religious and heritage sites across the country as well as sandy beaches at the Makran Coast had a lot of tourism potential.

Besides the significant increase in domestic tourism, he said millions of Pakistani expatriates, due to Islamophobia in the West, were showing interest in the country’s tourist sites and wanted to come with their families during the holidays.

The prime minister urged the business community to explore and exploit the avenue of tourism by investing in the development of tourist resorts in the country.

He said now with the stable exchange rate, growing stock exchange, reduced current account and trade deficits, and the endorsement of economic stability by the international financial institutions, the positive effects of the government’s stabilization measures had started to come.

The finance minister also highlighted the important role of private sector in the economic development of the country and said the government’s economic team was there to facilitate the businessmen by all means.

Sindh Governor Imran Ismail, speaking on the occasion, also highlighted the government’s economic achievements and criticized the opposition parties for only talking about negative things and not appreciating the government’s successes, which were based on hard fact.