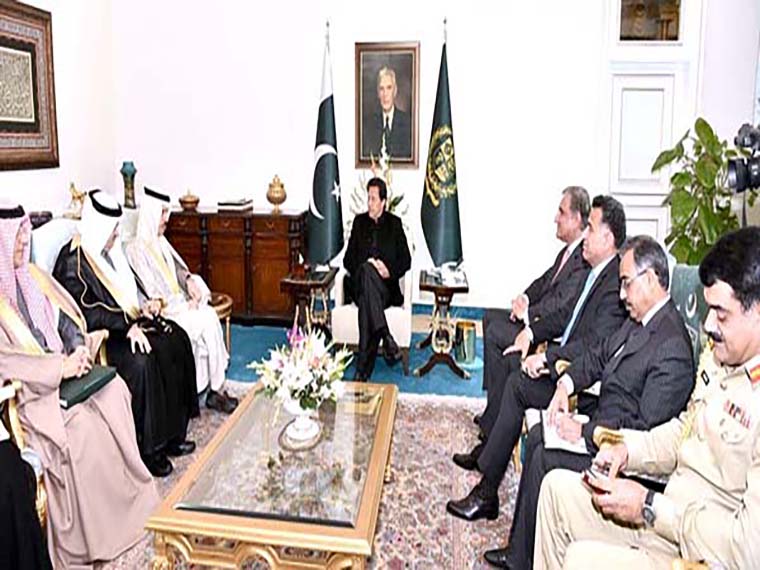 He emphasised that that the international community has to play its role in ensuring respect for rights and freedoms of Kashmiri people.  Besides, he said that the world community has to facilitate a just solution of the Jammu and Kashmir dispute while taking steps for the protection of minorities in India.

During the meeting, both sides exchanged on bilateral relations as well as regional developments.

According to PM Media Office’s press release, the PM elaborated worsening human rights and humanitarian situation in the Indian Occupied Jammu and Kashmir.

He also referred to  India’s discriminatory Citizenship Amendment Act (CAA) and the National Register of Citizens (NRC).  He underscored that the Indian government engaged in systematic efforts to marginalize and disenfranchise minorities, particularly Muslims.

Additionally, India’s belligerent actions on the Line of Control (LoC) were stoking further tensions and imperiling regional peace and security, he noted.

While welcoming the Saudi foreign minister, the prime minister underlined the special significance of the Pak-Saudi relationship. Specially, he noted ties based on close fraternal ties, historic links, and support at the grassroots level.

He recalled the visit of Crown Prince Mohammed bin Salman to Pakistan in February 2019. He also recalled the depth and substance that the visit imparted to bilateral cooperation in diverse fields.

The prime minister appreciated the growing economic ties between the two countries. He also lauded the Saudi commitment for investment in various sectors, particularly petrochemicals, mining and renewable energy.

The PM expressed the hope that the Saudi team will visit Pakistan soon for extending support in the development of tourism sector. He cited that Crown Prince agreed with the said support during the prime minister’s recent visit to Saudi Arabia.

The Saudi foreign minister conveyed the most cordial greetings of King Salman bin Abdulaziz Al Saud and of Crown Prince Mohammed Bin Salman to the leadership and the people of Pakistan.

The former also conveyed their deep appreciation for the Pakistan’s role for regional peace and stability.

Underscoring the key importance of the “core relationship” between Saudi Arabia and
Pakistan, Prince Faisal conveyed the firm commitment of the Saudi leadership to further deepening of fraternal ties and multi-faceted cooperation between the two countries.

The minister also reaffirmed the resolve to deepen bilateral collaboration in all fields, including trade, investments, energy and tourism sectors.

The enhanced role of the Organization of Islamic Cooperation (OIC) in the context of Jammu and Kashmir dispute was discussed.

This was the maiden visit of Foreign Minister Faisal bin Farhan Al Saud to Pakistan since assuming office.
Both the sides affirmed their commitment to maintain frequent high-level contacts and forge closer collaboration on bilateral matters and regional issues.