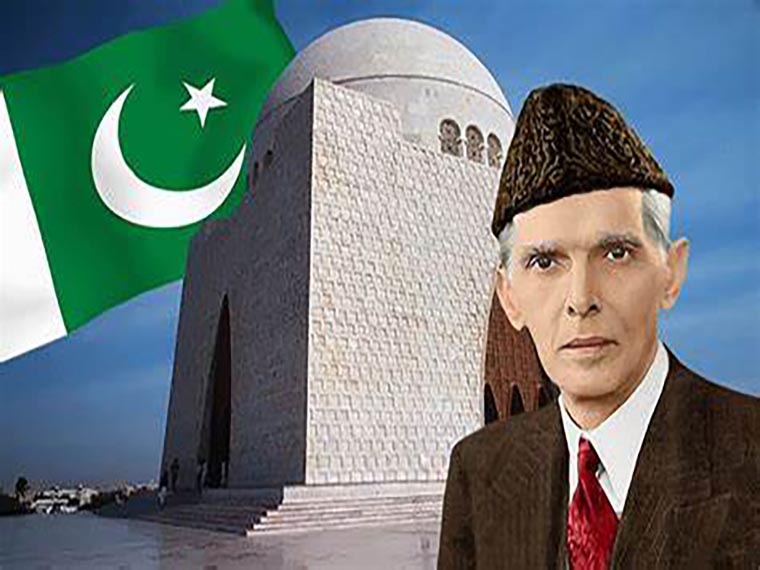 The nation is celebrating 144th birth anniversary of Father of the Nation Quaid-e-Azam Muhammad Ali Jinnah with renewed commitment.
The great nation of Pakistan renewed their pledge to work hard for progress and prosperity of the country.

Pakistani nation celebrate public holiday due to Christmas and Quaid’s anniversary today.
National flag is being hoisted at all public and private buildings.
Meanwhile, the day dawned with Qur’an Khawani at the Quaid’s mausoleum in Karachi.

The nation also host a number of events, including seminars, debates and exhibitions. These official and civil society level functions highlight life, achievements and different aspects of the personality of the Quaid.
Official and private media also broadcast special programmes, discussions, interviews and reports to highlight the significance of the day. Specially, they highlight different phases of independence struggle and the leadership role of Quaid-e-Azam Muhammad Ali Jinnah.

Meanwhile, recent developments in India, IOJ&K vindicate two-nation theory, according to President and the PM.
The President and Prime Minister have issued messages on the birth anniversary of Father of the Nation.
Furthermore, they said the recent developments in India and occupied Kashmir have again vindicated the conviction of the great Quaid.
Mr. Jinnah had warned that the extremist Hindus would never allow Muslim minority to live with respect and dignity.

President Dr Arif Alvi said Quaid-e-Azam was a visionary man who envisaged the separate identity, needs and political direction of the Muslims of the subcontinent.
He  further said the acumen of his foresight and vision can be witnessed even today with the prevailing conditions in India and occupied Kashmir.
The President said by paying homage to this Great Leader, we should stand united and re-affirm our faith in his teachings.

Besides, Prime Minister Imran Khan said the best way to pay homage to the Quaid on his birth anniversary is to adhere to his principles of Unity, Faith and Discipline.
Furthermore, he said the entire world is witnessing the perversion of the so-called secular outlook of the Indian Constitution today with discrimination and brutal actions against different minorities.
He said on this Day we must not also forget the oppressed people of Occupied Kashmir facing the worst human rights violations at the hands of the fascist RSS-inspired BJP government.

Foreign Minister Shah Mahmood Qureshi says today we pay homage to our Quaid, Muhammad Ali Jinnah, who believed in law and justice.
In a tweet, he said Quaid-e-Azam was a man of great vision who foresaw the importance of two separate nations.
He said 72 years later Quaid’s worst critics concede that he was right.

Antony Blinken and Shah Mahmood converse on Pakistan US relations