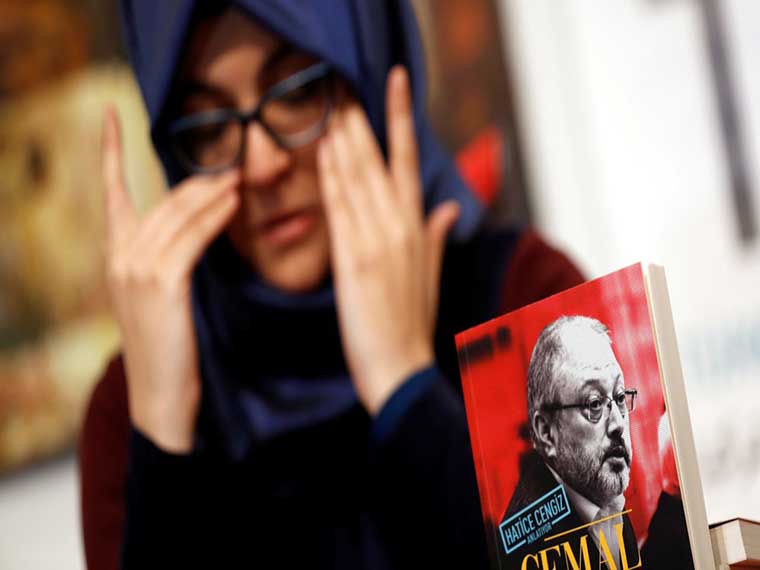 The Guardian correspondent notes mockery of justice in Khashoggi case while borrowing the idea from Turkish reaction apparently.
Bethan McKernan Turkey and Middle East correspondent
Chief Editor’s note: This opinion is the author’s and do not necessarily represent the views of GTV Network HD.

Saudi Arabia has been accused of engaging in a mockery of justice by shielding the alleged masterminds of the killing of the dissident journalist Jamal Khashoggi, after a court effectively exonerated Crown Prince Mohammed bin Salman’s inner circle of involvement in the murder.
The gruesome killing in the Saudi consulate in Istanbul in October 2018 stunned Saudi Arabia’s western allies, plunging the kingdom into its worst diplomatic crisis since the 9/11 attacks.
Five of the 11 officially unidentified men on trial were sentenced to death and three more were handed a combined 24 years in prison, the deputy public prosecutor, Shalaan bin Rajih Shalaan, told reporters in Riyadh on Monday.

How The Guardian correspondent sees

The investigation also concluded that Saud al-Qahtani, one of the crown prince’s most trusted advisers, was investigated and found to have no proven involvement in Khashoggi’s death, Shalaan added.
The findings contradict the conclusion of the CIA and other western intelligence agencies that Prince Mohammed directly ordered Khashoggi’s assassination, an allegation the kingdom has strenuously denied.
Qahtani, along with 16 other Saudis, was sanctioned by the US last year for his alleged role in the killing.
Shalaan also said “there was no premeditation to kill at the beginning of the mission” – a finding at odds with extensive evidence showing that a 15-man hit squad had arrived in Istanbul with an intention to kill.
The crown prince’s father, King Salman, ordered a shake-up of top security posts after Khashoggi’s death, but the ensuing Saudi investigation has been widely criticised as a cover-up operation designed to shield the heir to the throne and those around him from allegations of wrongdoing.

Agnès Callamard, a UN special rapporteur who authored an inquiry into Khashoggi’s death but was barred from access to the secretive trial, said the ruling that the murder was a spontaneous rather than premeditated crime was “anything but justice”.
“Under international human rights law, the killing of Khashoggi was an extrajudicial execution for which the state of Saudi Arabia is responsible,” she tweeted. “Bottom line: the hitmen are guilty, sentenced to death.

The masterminds not only walk free. They have barely been touched by the investigation and the trial. That is the antithesis of justice. It is a mockery,” said Callamard, who does not speak for the UN but reports her findings to it.
Callamard and several rights groups have repeatedly called for an independent international investigation into the journalist’s death. In a statement, Amnesty International called the outcome a “whitewash which brings neither justice nor truth”.

Ankara used the killing to exert pressure on its Saudi regional rivals, drip-feeding lurid details to the media and sharing damning audio recordings of the murder with other governments.

Fred Ryan, the publisher and chief executive of the Washington Post, for whom Khashoggi wrote a column about foreign affairs, said: “The complete lack of transparency and the Saudi government’s refusal to cooperate with independent investigators suggests that this was merely a sham trial.”

However, the verdicts were cautiously greeted as “an important step” by a senior official in Donald Trump’s administration, who spoke to Reuters on condition of anonymity.

The US president has condemned the killing, but defended his ally Prince Mohammed despite fierce criticism from Congress and members of his own party.

Saudi Arabia is the cornerstone of Trump’s Middle East policy and the president is unwilling to forgo trade or diplomatic ties with the oil-rich kingdom.

Khashoggi, a member of the Saudi elite, broke with the powerful royal family and moved to the US in 2017, where he became a vocal critic of the country as a columnist for the Washington Post.

He visited the Saudi consulate in Istanbul on 2 October last year to pick up paperwork for his forthcoming marriage to his Turkish fiancee, Hatice Cengiz, and was never seen again.

Riyadh initially denied it had anything to do with Khashoggi’s disappearance.

However, under pressure from sustained leaks from Turkish intelligence that suggested high-level Saudi involvement, the kingdom eventually admitted government agents carried out the killing, offering a series of shifting explanations.

The 59-year-old’s body has not been found and is thought by Turkish investigators to have been dismembered with a bone saw and then dissolved in acid.

According to Callamard’s independent investigation, which was published in June this year, a team of 15 Saudi agents – including a forensics doctor, intelligence and security officers and individuals who worked for the crown prince’s office – flew to Turkey hours earlier to meet Khashoggi inside the consulate.

On a purported audio recording from inside the consulate two Saudi officials were heard discussing how to cut up and transport Khashoggi’s body before he entered.

Prince Mohammed, who has cultivated an image of liberal reformer, emerged particularly tarnished after questions were raised over how such an operation could have been carried out without his consent or knowledge.

While the prince is popular at home for implementing wide-ranging social reforms, since his appointment as heir to the throne in 2017 he has also cracked down on dissent.

Hundreds of people who pose a threat to his financial or political supremacy have been detained and tried on national security grounds, including high-profile women’s rights campaigners and international business figures.

The CIA, along with several western governments, eventually concluded that the crown prince himself ordered Khashoggi’s assassination.

The kingdom has instead blamed rogue agents who it says took a repatriation mission too far.

As well as his former royal adviser and key ally Qahtani, two other senior figures were cleared of wrongdoing: the former deputy intelligence chief, Ahmed al-Asiri, was tried but released due to insufficient evidence; and Mohammed al-Otaibi, the Saudi consul-general in Istanbul at the time of Khashoggi’s death, who was found not guilty.

In total 21 people were arrested and 10 more called for questioning, the public prosecutor’s office said. No other details were immediately given about the rulings in the highly secretive trial, which began in January and was conducted over nine sessions.

The identities of the convicted men were not immediately confirmed by Saudi officials. Most observers, including UN investigators, have been repeatedly barred from hearings, although a handful of diplomats, including from Turkey, as well as members of Khashoggi’s family, were allowed to attend the sessions.

The death penalty in Saudi Arabia is carried out by beheading. The convicted defendants may appeal against the preliminary verdicts, the prosecutor’s office said.

Cengiz said the announcement was “not acceptable”. “As we will never forget you, we will not forget your murderers, and also those who are trying to cover up your murder,” she wrote on Twitter.

The son thanks Kingdom

Salah, one of Khashoggi’s sons, said his family had achieved justice thanks to the verdict of Saudi Arabia’s public prosecutor.

According to the Washington Post, the journalist’s four adult children have received payments and property from the royal family as blood money in lieu of a public apology.

Pictures of the grieving Salah shaking Prince Mohammed’s hand after being summoned to a royal palace in Riyadh in the weeks following his father’s death were widely condemned as a ruthless photo opportunity.

Chief Editor’s note: This opinion is the author’s and do not necessarily represent the views of GTV Network HD.
GTV