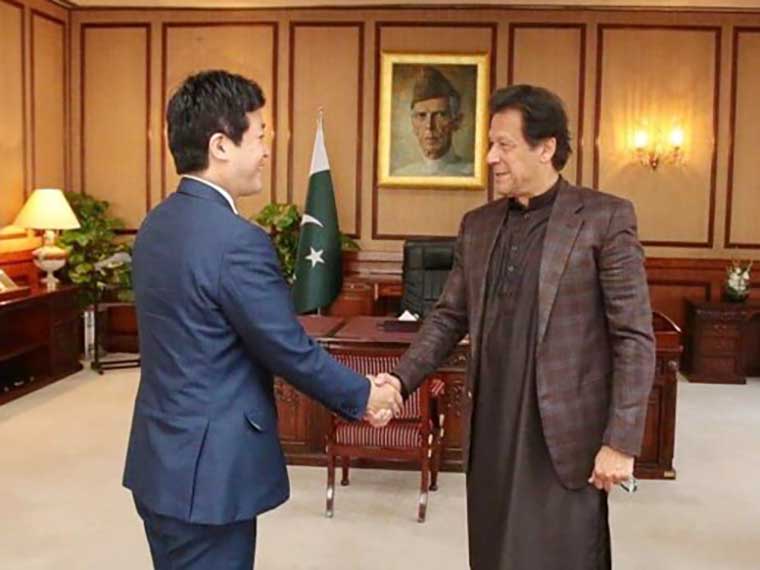 Pakistan and Japan eye enhanced bilateral commercial relations which remain the topic during Japanese official meeting with Prime Minister Imran Khan.
PM Khan specially underscored importance of working together of Pakistan and Japan more closely.
He said this while talking to Kentaro Sonoura, Special Adviser on Foreign Affairs to Prime Minister of Japan, who called on him here at the PM Office yesterday.

Pakistan PM called for enhanced mutually-beneficial cooperation, particularly in the fields of investment, trade, agriculture, industry, human resource development, education, tourism, and people-to-people contacts.
During the meeting, both sideds also exchanged views on regional developments besides Pakistan-Japan bilateral relations.
Furthermore, PM highlighted his government’s initiatives to spur economic growth through investment-friendly, development-focused and people-centered policies.
He also underlined his efforts focused on creation of a peaceful environment in Pakistan’s neighbourhood.
Moreover, he appreciated the signing of the Memorandum of Cooperation (MoC) on Skilled Workers Programme between the two countries.
The prime minister highlighted that Pakistan with 60% of its population below the age of 30 and the graying population in Japan had inherent complementarities. He said they could utilize these to the benefit of their economies.
He underscored Pakistan’s readiness to welcome Japanese businesses in all the sectors. Highlighting the economic turn-around in the country and the government’s efforts to enhance the ease of doing business, he hoped that the Japanese companies could take full advantage of the vast opportunities in Pakistan.
The prime minister highlighted the worsening human rights and humanitarian situation in the Indian Occupied Jammu and Kashmir (IOJK) and serious risks for peace and security posed by India’s belligerent posture and illegal actions.
Imran Khan expressed the hope that the international community would play its role in ensuring respect of the fundamental human rights of the Kashmiris and facilitating just solution of the Jammu & Kashmir dispute in accordance with United Nations Security Council resolutions.
The prime minister expressed deep condolences over the tragic killing of Japanese aid worker Tetsu Nakamura in Afghanistan. He also reaffirmed Pakistan’s steadfast support for the Afghan peace and reconciliation process.
The Japanese Special Adviser on Foreign Affairs expressed satisfaction at current trajectory in the bilateral relations. He conveyed Japan’s appreciation for the prime minister’s efforts for economic development and regional peace.
He reiterated the Government of Japan’s full support to further enhance bilateral cooperation in myriad fields of mutual benefit.
He also underlined that Japan could assist Pakistan in its socio-economic development through assistance in export promotion, increase in agricultural productivity, ICT (information communication technology), polio eradication, water resource management, and so on.
In the regional context, the special adviser lauded Pakistan’s support for the efforts for a peaceful and stable Afghanistan. He also underlined Japan’s stance that human rights must be respected under all circumstances and hoped that escalation of tensions would be contained and peace and stability preserved in South Asia.
While noting the renewed vigour and momentum in high-level exchanges, both sides reaffirmed their commitment to take the bilateral relationship to a higher level.
The prime minister said Pakistan looked forward to welcoming Japanese Prime Minister Shinzo Abe at the earliest opportunity.

Karachi: Father burns son for an ‘Unsatisfactory answer’ about studies