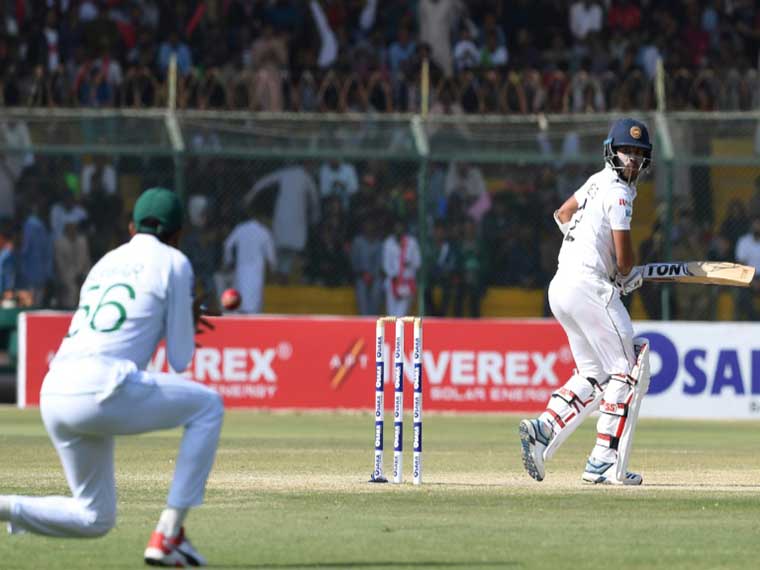 The two teams were playing the second and final test match at National Stadium in Karachi.

Finally, Pakistan won by 263 runs. That success also brought victory for Pakistan in two-match series  with 1-0.

on 5th day today, Sri Lanka resumed their innings at 212-7, could not add a single run to their score and were 212 all out.

However, on the fourth day of Karachi Test against Pakistan, Sri Lanka, in their second innings were 212 for 7 at stumps.

Earlier, Pakistan had declared their second innings at 555 runs for the loss of three wickets.

Naseem Shah claimed 5-31 for the hosts.

Earlier, the two teams played first test match at Rawalpindi Stadium. That had ended in a draw.

Meanwhile, espn cricinfo termed it the first home Test win of Pakistan in 13 years. And that’s it. All Pakistan needed was 16 balls to wrap up a resounding 263-run win. Naseem took a wicket with the first ball of the day, and the next over, Oshada Fernando nicked off to first slip off Yasir Shah.

Naseem Shah would wrap up the win with his first five-fer, trapping Vishwa Fernando plumb in front. Fernando would review, just, it would seem, for a laugh; I’ve never seen a more straightforward decision.
And that, perhaps, kickstarts another era for Pakistan. It’s one they’ve begun outstandingly. The last time Pakistan won a Test in Pakistan also came in Karachi – over 13 years ago – when Pakistan beat West Indies.