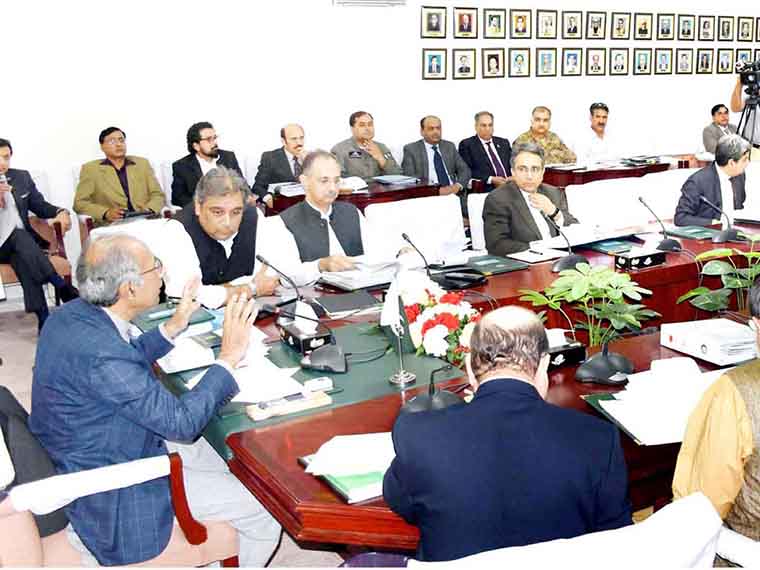 Economic Coordination Committee meets to review performance different sectors of the national economy.
Adviser to the PM on Finance Hafeez Sheikh presided over the meeting of the ECC in Islamabad today (Monday).

Meanwhile, Ministry of Finance has released the decisions which ECC of the Cabinet approved.
It approve a technical supplementary grant equal to Rs 4.05 billion funds lapsed during the financial year 2018-19 under the Sustainable Development Goals Achievement Programme (SAP).

ECC at its meeting in the Cabinet Block today approved the proposal which Cabinet Division submitted.

The re-allocated funds would be used under the SAP to make specific interventions as per demand of the community across the country in line with the UN Conventions.

The ECC also granted ex-post facto approval to a proposal by the Ministry of Interior for a technical supplementary grant amounting to Rs100 million on making security arrangements in the federal capital in October 2019.

However, the ECC expressed its concern at the manner in which ad hoc arrangements were made which were costly and disruptive for business sector and for perception of the country, and asked the capital administration to find a permanent solution to deal with the issue in future.

The ECC also approved a proposal by the Ministry of Industries & Production for utilisation of the subsidy as approved by the Cabinet in pursuance of the Prime Minister’s directive dated 8th November 2019 involving grant of Rs 6 billion for the Utility Stores Corporation (USC) of Pakistan for subsidy and procurement of essential commodities, including flour, sugar, ghee/oil, pulses and rice.

The ECC also constituted a committee headed by Mr Abdul Razak Dawood, Adviser to the Prime Minister on Commerce, Textile, Industries & Production and Investment, to monitor the disbursement of subsidy and provision of commodities at a fair price to the poor segment of the society through a transparent and effective mechanism and report back to the ECC in its next meeting.

On a proposal by the Ministry of Narcotics Control for a technical supplementary grant of Rs 7.904 billion for operational cost of Anti-Narcotics Force after the release of said money by the International Narcotics & Law Enforcement Affairs (INL-P), US Embassy Islamabad, the ECC approved the proposal with instructions that such proposals involving transfer of money from external sources should be taken up by the Ministry of Finance itself instead of the ECC and release of money be ensured through a smooth manner.

The ECC also approved a proposal by the Finance Division for submission of supplementary budget statement (addendum) amounting to Rs 170.418 billion from the Federal Consolidated Fund for the financial year 2018-19 to the National Assembly as per Article 84(a) of the Constitution. The ECC also approved another proposal from the Finance Division for laying before the National Assembly the supplementary demands for grants and appropriations for the financial year 2018-19.

The ECC also took up a proposal by the Ministry of National Food Security and Research for exemption of 5% sales tax on cotton seed cake and after a detailed discussion on the issue, referred the matter to the Finance Division for examination and a report to ECC in its next meeting.