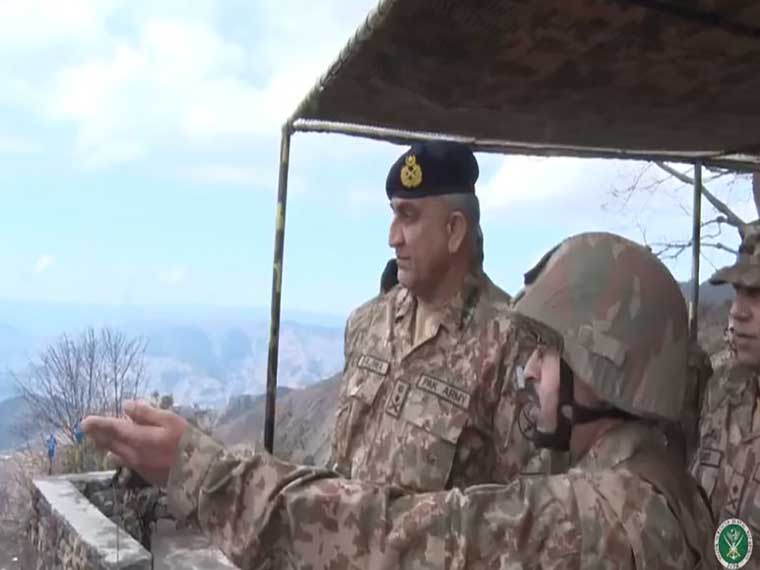 He vowed that the armed forces  fully prepared for the country’s defence.
According to ISPR, the army chief emphasised “Our quest for peace must never be misconstrued as weakness. There will never be a compromise on Kashmir whatever the cost. We are capable & fully prepared to thwart any misadventure/aggression for defence of our motherland.”
Notably, he visited the LoC while Indian and Pakistani troops have been exchanging fire across the restive border.

COAS vows no compromise on Kashmir

Furthermore, the COAS ruled out the possibility of compromise on Kashmir. He vowed no compromise whatever the cost.
He also visited Combined Military Hospital Muzaffarabad.
Meanwhile, ISPR footage showed the army chief met and addressed troops stationed along the LoC and also visited patients receiving treatment at CMH.
The military’s media wing had reported on Saturday that Pakistan Army responded to ceasefire violations from across the dividing line. Due to that, Indian army suffered heavy casualties and damage to its posts.
Following Indian Army Chief Bipin Rawat’s statement that the situation at the LoC could “escalate any time”, the DG ISPR had cautioned that the “Pakistan Armed Forces shall befittingly respond to any Indian misadventure or aggression.”
Meanwhile, Prime Minister Imran Khan had stated that the Indian army chief’s statement adds to Pakistan’s concerns of a “false-flag operation”.
He had warned that if India undertakes such an operation, “Pakistan will have no option but to give a befitting response”.
GTV

98 people died due to Coronavirus infection during last 24 hours