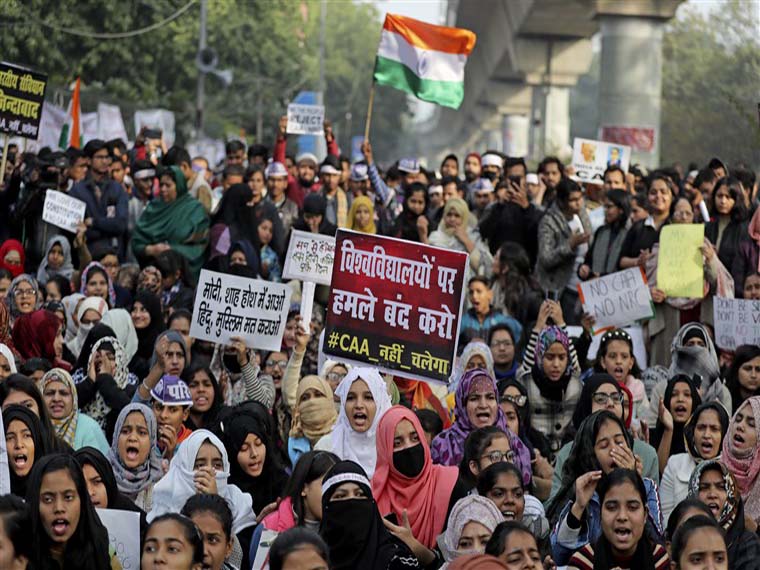 Modi to lead BJP rally as 23 killed and 1500 arrested in crackdown against the protesters. India witness mass demonstrations after parliament cleared the Citizenship Amendment Act on Dec. 11.
According to international media reports, at least 23 people were killed while police arrested more than 1500 across India.
However, critics say the Act undermines the country’s secular constitution.
Additionally, some 4,000 people have been detained and then released, the officials said.

Incidentally Indian Prime Minister Narendra Modi has planned to lead rally in New Delhi today. The opponents of the law also planned fresh demonstrations in New Delhi, and northern state of Uttar Pradesh, where the largest number of deaths have occurred.
In most places, the demonstrations have been joined by people of all faiths, but Uttar Pradesh is a tinder-box for communal tensions between Hindus and Muslims. Authorities there have shut internet and mobile messaging services to prevent the circulation of inflammatory material.
More than 1,500 protesters have been arrested across India in the past 10 days, additionally, some 4,000 people have been detained and then released, the officials said.
Those arrested and detained had been resorting to violence during the protests, said two senior federal government officials overseeing the country’s internal security who spoke on condition of anonymity.

The law aims to grant citizenship to minorities of the Hindu, Buddhist, Christian, Sikh, Jain and Parsi faiths from Muslim-majority Afghanistan, Pakistan and Bangladesh, deemed as suffering persecution there. The applicant should have entered India on or before Dec. 31, 2014.
Hundreds of protesters and police have been injured in the protests, the strongest show of dissent against Prime Minister Narendra Modi’s Hindu nationalist government since he first elected in 2014.
According to government sources, Modi met his council of ministers on Saturday to discuss security measures related to the protests.
Demonstrations continued on Saturday despite curfews and tough measures aimed at shutting down the protests.
India’s most populous state, Uttar Pradesh, has seen the worst violence with nine people killed and several more in critical conditions in hospital. The state, which has long seen clashes between majority Hindus and minority Muslims, is ruled by Modi’s nationalist party.
Rights activists in the state said police had raided their houses and offices to prevent them from planning fresh demonstrations. Authorities also shut schools across the state as fresh protests erupted on Saturday.
More demonstrations were planned in several parts of the country, including in the northeastern state of Assam. Resentment against illegal immigrants from Bangladesh has simmered for years in Assam, one of India’s poorest states, where some residents accuse outsiders, Hindus or Muslims, of stealing jobs and land.
“Women in Assam have shown that we can lead a movement from the front,” Garima Garg, a fashion designer, told Reuters. She was among thousands who took part in an all-woman protest across Assam on Saturday.
Critics of the law say it has struck a blow to a country that has long taken pride in its secular constitution. India has a population of 1.3 billion, with a majority of Hindus, a large minority of Muslims and several other smaller faiths.
“This piece of legislation strikes at the heart of the Constitution, seeking to make India another country altogether,” prominent historian Ramachandra Guha wrote in The Telegraph.
He was released from police custody on Thursday after being detained for protesting against the law in the southern city of Bengaluru.

Political opposition against the law has included state leaders from regional parties saying they will prevent its implementation in their states. The government has said there is no chance the law will be repealed.
On Saturday, right-wing Hindu organizations and academicians expressed support for the law. Over 1,000 professors and scholars congratulated the parliament and government for what they said was a progressive law standing up for forgotten minorities.
“We also note with deep anguish that an atmosphere of fear and paranoia is being created in the country through deliberate obfuscation and fear-mongering, leading to violence in several parts of the country,” they said in a statement.
GTV

Zabihullah Mujahid thanks Pakistan for supportive stance on Afghanistan