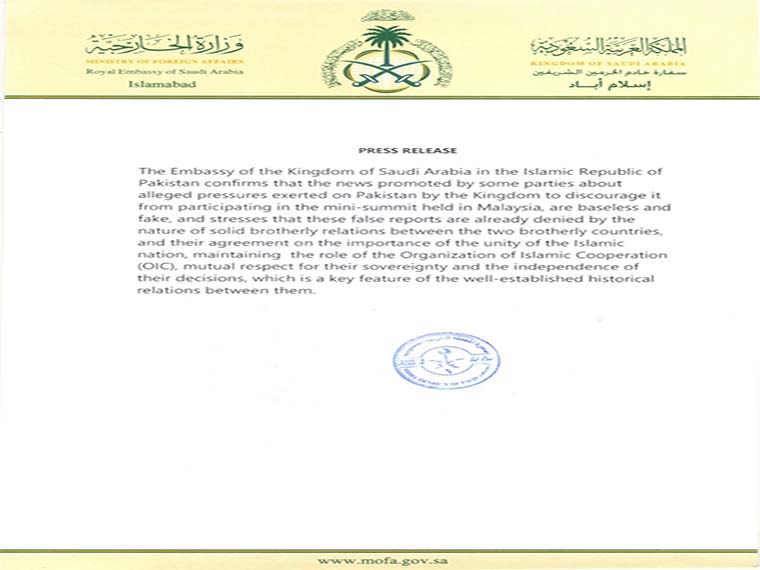 Turkey and Saudi war of words on pressure on Pakistan government with Turkish President blamed the Kingdom which the latter denied.

Finally, the Saudi embassy in Islamabad had to issue a clarification on the allegations. It rebuffed the reports that the Kingdom had allegedly pressured Pakistan to discourage it from participating in the KL summit.

It said that KSA had mutual respect for their sovereignty and the independence of their decisions, which is a key feature of the well-established historical relations between them”.

Turkey and Saudi war of words

Regarding the absence of Pakistan and Indonesia at the summit, he said he wanted them present as well.

However, he also blamed UAE along with Saudi Kingdom.  He  said that Saudi Arabia’s and United Arab Emirates have the tendency to put pressure on other countries in doing or not doing things.
Specially, he gave the example of Pakistan, Indonesia and Somalia.

However, more than that, 4 million Pakistanis  are working in Saudi Arabia while kingdom threateneed they would send them back and re-employ Bangladeshi people instead.
Turkish president further said that Saudi kingdom has also used similar threatening tactics on SBP that Saudis would withdraw their money.
According to Erdoğan, due to its economic difficulties, Pakistan had to obey such threats.
Moreover, he implied that Indonesia has also suffered from similar problems.
Somalia rises with assistance from Turkey
When one of the journalists mentioned that similar situations have also taken place in Iraq, Syria and Somalia, Erdoğan agreed.
He said as you know, these (Saudi Arabia and the UAE) did not contribute to Somalia at all.
However, Somalia, despite being in trouble (at the time) took a stance,”  he said, referring to the UAE’s intention of taking on initiatives in the country that were eventually canceled either by the UAE itself or denied by the Somalian government.
Erdoğan also pointed to the fact that “surprisingly” almost none of these supposed “bigger” countries have any embassies in Somalia. “They have constructed something similar to a trailer near the airport, and they call it an embassy.
He said Turkey has the biggest embassy in the world in Somalia. Turkey is conducting many projects in that African country to assist the Somalian people.
Erdogan said that tight now, we are providing military training to Somalians and their training is taking place there. He said Turkey was also providing health services and educational services while many Somalian students study in Turkey.