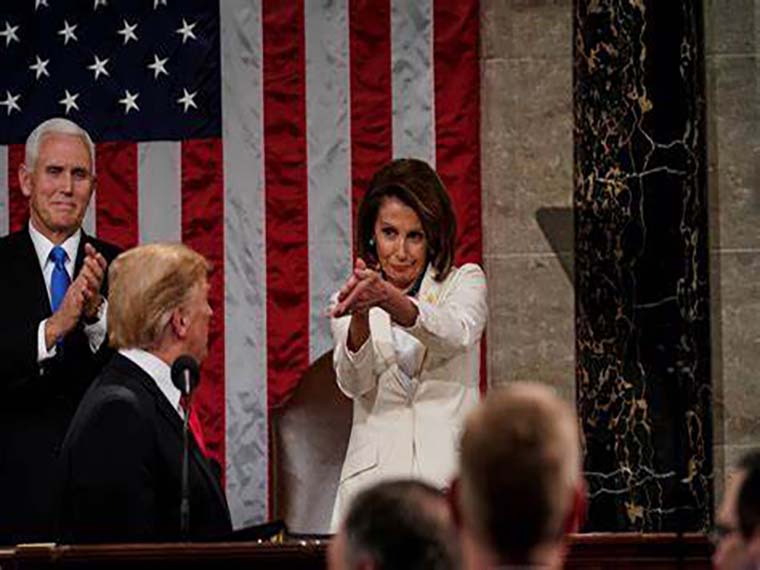 President Trump State of the Union
President Donald Trump has accepted the invitation from House Speaker Nancy Pelosi to deliver the State of the Union address on February 4, 2020.
The White House released a statement later Friday confirming Trump had accepted Speaker Pelosi’s invitation.
It comes just days after the House of Representatives took the historic step of voting to impeach Trump, a move that has led to an escalation of partisan tensions on Capitol Hill.
Speaker House of Representatives Nancy Pelosi wrote a letter addressed to the President Friday.

“In the spirit of respecting our Constitution, I invite you to deliver your State of the Union address before a joint session of Congress on Tuesday, February 4, 2020 in the Chamber of the U.S. House of Representatives.”
Interestingly, state of the union coincides with impeachment proceedings. Notably, the House has voted while in next step pro-impeachment lawmakers eye Senate to hold a trial.
Finally, Senate will decide whether to remove the President from office. But it continues to remain unclear when that will start.  It may begin early next year.

Meanwhile, Senate Majority Leader Mitch McConnell said that the Senate remains at an “impasse” about setting the rules of the impeachment trial.

It left the status of the trial in limbo as lawmakers leave Washington until the new year.

The House of Representatives took its final vote of the year this week without appointing impeachment managers or sending articles of impeachment to the Senate.
That also suggested that House Democrats won’t take the steps needed to start the impeachment trial in the Senate until January.

Despite the fits and starts over the trial, Pelosi and other House Democrats are playing down the prospect of an extended standoff with the Senate over the articles of impeachment.
However, signaling that it’s only a matter of time before the House does in fact transmit them to the Senate.

President Trump State of the Union

Moreover, US has precedent for a President delivering the State of the Union in the midst of congressional impeachment proceedings.
Senators sworn in for the impeachment trial of former President Bill Clinton on January 7, 1999. The President went on to deliver a State of the Union address not long after, on January 19, 1999 amid the trial.
Trump’s most recent State of the Union address attracted attention after it became a point of contention in negotiations related to the partial government shutdown.
In mid-January, Pelosi asked Trump to postpone the address or deliver it in writing, citing security concerns.
Trump responded by canceling Pelosi’s use of a military vehicle for an overseas trip.
But, he eventually acquiesced to her request and agreed to reschedule the speech after the shutdown had ended.
GTV