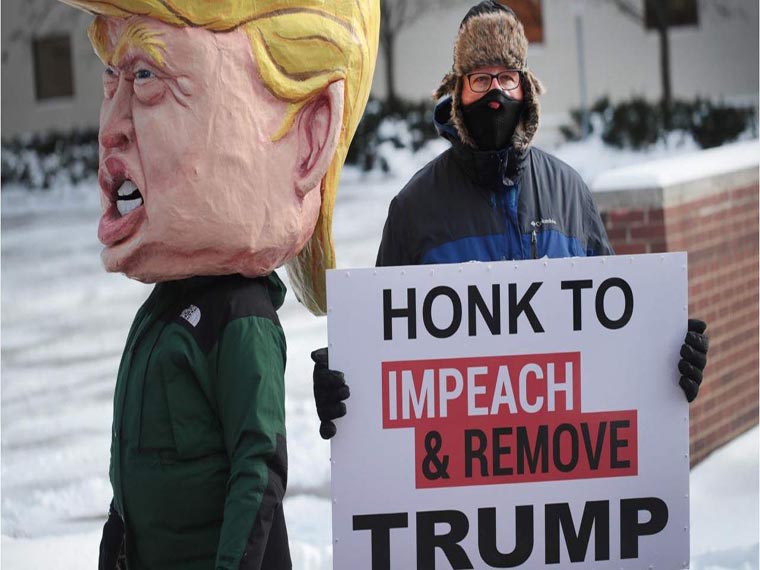 Impeachment was inevitable because in 2016, Trump asked for Russia’s intervention in the election, got it — and ultimately avoided paying any price for it.

Impeachment was inevitable because after he moved into the White House, Trump fired FBI Director Jim Comey, then publicly shamed Attorney General Jeff Sessions for recusing himself from the Russia investigation.

And impeachment was inevitable because Trump has told more than 15,000 documented lies in just under three years of holding office.
None of those events were mentioned in the articles of impeachment adopted Wednesday night by the House of Representatives.
But together they demonstrated a pattern in the president’s behavior — a tendency to place his own interest above the national good, a willingness to abuse power, a complete and total disregard for the truth — that led to this moment.
That pattern led to the Ukraine scandal, and forced House Speaker Nancy Pelosi (D-Calif.) to finally abandon her longstanding desire to avoid this process.
Republicans on Wednesday complained frequently that Democrats have been looking to impeach this president since he took office.
That is true — but only because that pattern of behavior was so obvious, from the beginning, that Trump’s unfitness to hold the office was manifest to nearly everybody who was willing to look. Remember: It was apparent to many leading members of the GOP, too — at least until the vast majority of them decided to hop on Trump’s bandwagon.
GOP leaders have also suggested that Democrats are impeaching the president over policy differences. That is incorrect. Democrats hate Trump’s Muslim ban, his border wall, his child separation policy, his efforts to undermine the Affordable Care Act, and his giant tax cuts for the rich.
There are plenty of big policy differences for Democrats to hate, and they do. But they did not impeach him simply for being wrong, even cruel, on those issues. They impeached him only when there was clear evidence of abuse of power.
If impeachment was inevitable, it is also insufficient. Barring an unexpected turn of events, the Senate trial will end with the president’s acquittal. He will brandish this acquittal as exoneration, and many of his followers will believe him.
Trump still stands a fair chance of being re-elected next year — though, given his unpopularity, that event would probably require a level of Democratic stumbling, GOP vote suppression, and Electoral College voodoo that America hasn’t seen since, oh, 2016.
Even if Trump leaves office, though, the stain he leaves on the country won’t soon be blotted out. We’ve learned too much — about the failures of the media, about GOP willingness to turn the truth upside down, about the rot that has let overt racism re-emerge into the political mainstream — to be complacent.
If you care about democracy and the rule of law — and I mean really care, to the point that you’re willing to accept that your side is going to lose the argument occasionally, yet resist the temptation to stack the deck in your party’s favor — it is still permissible to take a moment of satisfaction at Wednesday’s events. (You probably shouldn’t cheer, though, unless you want to get this scathing look from Pelosi.)
Our democratic republic is under duress, but our institutions have correctly — if imperfectly — identified the danger and reacted accordingly. That is worth celebrating. That pleasure should be short-lived, however.
The impeachment of Donald Trump was inevitable, yes. But moving beyond Trumpism will require deliberate choices and hard work from all of us.
Joel Mathis
Contributing Writer The Week

Joel Mathis is a freelance writer who lives in Lawrence, Kansas with his wife and son. He spent nine years as a syndicated columnist, co-writing the RedBlueAmerica column as the liberal half of a point-counterpoint duo. His honors include awards for best online commentary from the Online News Association and (twice) from the City and Regional Magazine Association.