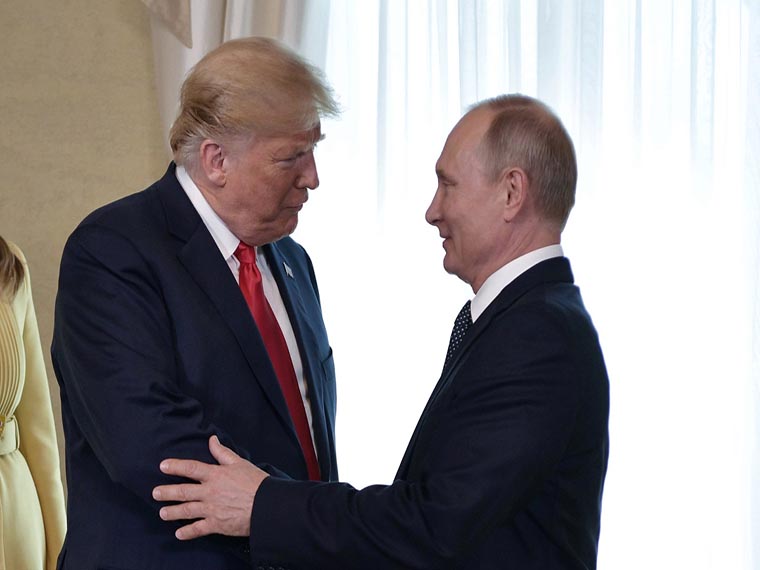 Putin accuses Democratic Party of inventing reason to impeach Trump
MOSCOW — Russian President Vladimir Putin has dismissed the impeachment case against President Donald Trump.
He accused the Democratic Party of using “absolutely invented reasons” to try and remove Trump from office.
Asked about the impeachment at his annual end-of-year press conference in Moscow on Thursday, Putin noted that it was unlikely it would get further than the Senate.
“It needs to go through the Senate where as far as I know the Republicans have a majority. It’s hardly like they will want to distance themselves from power on account of — in my view— some absolutely invented reasons,” he said.

In his first comments since Congress voted to impeach president Trump on Wednesday, Putin accused Democrats of trying to remove Trump using “other means,” having lost the 2016 presidential elections.
“It is simply a continuation of an internal political battle,” Putin continued.
“And the party that lost the elections, the Democrat party is trying to achieve results with other ways, with other means. Bringing accusations against Trump of a conspiracy with Russia, later it becomes clear there was no conspiracy. It cannot lie at the basis of impeachment.”
After months of intense debate, Democrats led the House to approve two articles of impeachment Wednesday, making Trump the third president in U.S. history to be impeached.
The House impeached the president on two counts: abuse of power and obstruction of Congress by attempting to heed the investigation.
House Speaker Nancy Pelosi announced the historic and mostly party-line vote, 230-197, making it official and setting up a Senate trial.
Trump responded to the announcement by telling a campaign rally in Michigan that the Democrats “are trying to nullify the ballots of tens of millions of patriotic Americans.”
“Crazy Nancy Pelosi and House Democrats have branded themselves with an eternal mark of shame. It is a disgrace. Democrat lawmakers do not believe you have the right to select your own president,” Trump said.
Putin, who has always denied interfering in the 2016 presidential election, has alleged the inquiry by Special Counsel Robert Mueller found no proof of meddling by Russia, despite the investigation providing substantial evidence of wide-ranging Russian operation seeking to tip the election towards Trump.
Putin on Thursday said the new allegations that Trump sought to pressure Ukraine’s government into announcing politically motivated investigations were also thought up by the Democrats to seek an unfair impeachment.
Dimitri Simes, an American expert on Russian-U.S. relations and publisher of The National Interest asked the question on impeachment.
The press conference where Putin made the comments has become a fixture of his rule — a marathon event.
Interestingly, he fields questions from hundreds of journalists for hours there.
The subjects range from foreign politics to local issues, from the price of groceries to the state of roads in a village.