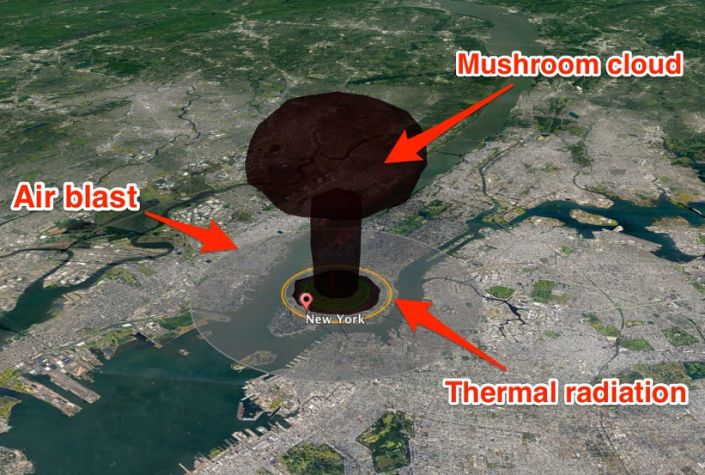 Six US cities remain probable target of nuclear strike despite slim chances.
The chance that a nuclear bomb would strike a US city is slim, but nuclear experts say it’s not out of the question.
A nuclear attack in a large metropolitan area is one of the 15 disaster scenarios for which the US Federal Emergency Management Agency has an emergency strategy. The agency’s plan involves deploying first responders, providing immediate shelter for evacuees, and decontaminating victims who have been exposed to radiation.
For everyday citizens, FEMA has some simple advice: Get inside, stay inside, and stay tuned.
But according to Irwin Redlener, a public-health expert at Columbia University who specializes in disaster preparedness, these federal guidelines aren’t enough to prepare a city for a nuclear attack.
“There isn’t a single jurisdiction in America that has anything approaching an adequate plan to deal with a nuclear detonation,” he said.
Six US cities remain probable target
That includes the six urban areas that Redlener thinks are the most likely targets of a nuclear attack: New York, Chicago, Houston, Los Angeles, San Francisco, and Washington, DC. These cities are not only some of the largest and densest in the country, but home to critical infrastructure (like energy plants, financial hubs, government facilities, and wireless transmission systems) that are vital to US security.
Each city has an emergency-management website that informs citizens about what to do in a crisis, but most of those sites (except for LA and New York) don’t directly mention a nuclear attack. That makes it difficult for residents to learn how to protect themselves if a bomb were to hit one of those cities.
“It would not be the end of life as we know it,” Redlener said of that scenario. “It would just be a horrific, catastrophic disaster with many, many unknown and cascading consequences.”

Cities might struggle to provide emergency services after a nuclear strike

Nuclear bombs can produce clouds of dust and sand-like radioactive particles that disperse into the atmosphere — what’s referred to as nuclear fallout. Exposure to this fallout can result in radiation poisoning, which can damage the body’s cells and prove fatal.
The debris takes about 15 minutes to reach ground level after an explosion, so a person’s response during that period could be a matter of life and death. People can protect themselves from fallout by immediately seeking refuge inside a steel or concrete building with no windows.
“A little bit of information can save a lot of lives,” Brooke Buddemeier, a health physicist at the Lawrence Livermore National Laboratory, told Business Insider.
Buddemeier advises emergency managers about how to protect populations from nuclear attacks.
“If we can just get people inside, we can significantly reduce their exposure,” he said.
The most important scenario to prepare for, according to Redlener, isn’t all-out nuclear war, but a single nuclear explosion such as a missile launch from North Korea. Right now, he said, North Korean missiles are capable of reaching Alaska or Hawaii, but they could soon be able to reach cities along the West Coast.
Another source of an attack could be a nuclear device that was built, purchased, or stolen by a terrorist organization. All six cities Redlener identified are listed as “Tier 1” areas by the US Department of Homeland Security, meaning they’re considered places where a terrorist attack would yield the most devastation.
“There is no safe city,” Redlener said. “In New York City, the detonation of a Hiroshima-sized bomb, or even one a little smaller, could have anywhere between 50,000 to 100,000 fatalities — depending on the time of day and where the action struck — and hundreds of thousands of people injured.”
Some estimates are even higher. Data from Alex Wellerstein, a nuclear-weapons historian at the Stevens Institute of Technology, indicates that a 15-kiloton explosion (like the one in Hiroshima) would result in more than 225,000 fatalities and 610,000 injuries in New York City.
Under those circumstances, not even the entire state of New York would have enough hospital beds to serve the wounded.
“New York state has 40,000 hospital beds, almost all of which are occupied all the time,” Redlener said.
He also expressed concern about what might happen to emergency responders who tried to help.
“Are we actually going to order National Guard troops or US soldiers to go into highly radioactive zones? Will we be getting bus drivers to go in and pick up people to take them to safety?” he said. “Every strategic or tactical response is fraught with inadequacies.”

In 1961, around the height of the Cold War, the US launched the Community Fallout Shelter Program, which designated safe places to hide after a nuclear attack in cities across the country. Most shelters were on the upper floors of high-rise buildings, so they were meant to protect people only from radiation and not the blast itself.
Cities were responsible for stocking those shelters with food and sanitation and medical supplies paid for by the federal government. By the time funding for the program ran out in the 1970s, New York City had designated 18,000 fallout shelters to protect up to 11 million people.

In 2017, New York City officials began removing the yellow signs that once marked these shelters to avoid the misconception that they were still active.

Redlener said there’s a reason the shelters no longer exist: Major cities like New York and San Francisco are in need of more affordable housing, making it difficult for city officials to justify reserving space for food and medical supplies.

“Can you imagine a public official keeping buildings intact for fallout shelters when the real-estate market is so tight?” Redlener said.

‘This is part of our 21st-century reality’

“There’s fear among public officials that if they went out and publicly said, ‘This is what you need to know in the event of a nuclear attack,’ then many people would fear that the mayor knew something that the public did not,” he said.

But educating the public doesn’t have to be scary, Buddemeier said.

“The good news is that ‘Get inside, stay inside, stay tuned’ still works,” he said. “I kind of liken it to ‘Stop, drop, and roll.’ If your clothes catch on fire, that’s what you should do. It doesn’t make you afraid of fire, hopefully, but it does allow you the opportunity to take action to save your life.”

Both experts agreed that for a city to be prepared for a nuclear attack, it must acknowledge that such an attack is possible — even if the threat is remote.

“This is part of our 21st-century reality,” Redlener said. “I’ve apologized to my children and grandchildren for leaving the world in such a horrible mess, but it is what it is now.”

Hangu: 6 people,3 children died due to leakage of gas

Tennis star, Roger Federer announces his retirement at the age of 41