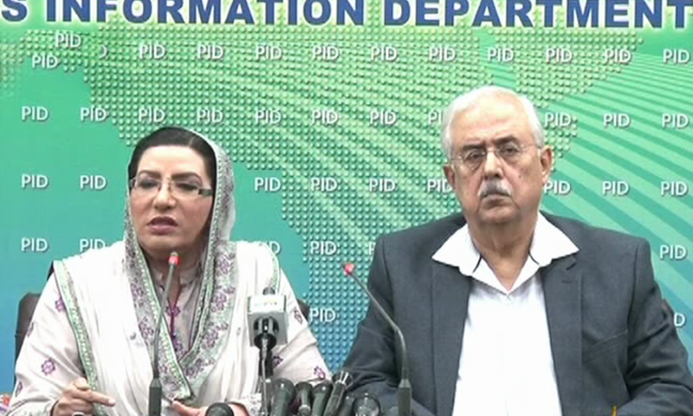 While addressing a press conference in Islamabad late Tuesday night, Khan clarified that he was discussing legal aspects.

Legally speaking, the high treason case against Musharraf was void from the beginning, he said.

The AG also pointed that a trial in absentia not a routine matter.

A special court had earlier in the day sentenced the former military ruler to death.

“[Musharraf] was not given a chance to record his statement under Section 342 (of the Constitution), to present his testimony and witnesses.

Furthermore, he said every person is guaranteed a fair trial under Article 10-A of the Constitution.

The attorney general said a trial should not just be fair but must also be seen to be fair.

“A special court was then formed and then a complainant — who was an interior secretary — filed a complaint that Musharraf had violated the Constitution and that the matter falls within Article 6, therefore a high treason case must be made against him.”

He recalled that Musharraf was in Pakistan when the charges against him were announced. Musharraf had filed some petitions requesting that others involved in the decision to impose an emergency also be made a party to the case.

Moreover, AG Khan said that following the 18th Amendment, in which Article 90 was modified, the president was no longer given the authority by the federal government to file a complaint.

“Because he could not file a complaint, the action taken against Musharraf was void from the beginning and could not have been carried out lawfully.”

He further noted bed-ridden Musharraf is in the ICU at a hospital. So this is another major issue: when you know a person is hospitalised, in his absence was it right to announce this judgment or not?” he said, as he continued to explore the legality of the verdict.

He said that the government wished to change its team at one point in the case, so that “mistaks made by the past governments” can be rectified.

“[The previous] team was not ready to make those changes.”

He said when the team was swapped out, the court reacted very strongly and issued immediate directives to get the case moving, “irrespective of the situation”.

The last team had filed “written arguments” after its removal and the court thought that to be true and based their decision on those arguments.

“Despite that, the court refused to listen to him and said a new team of senior lawyers must be formed,” said AG Khan.

He said the new team had requested the court for some time to study the case as they had just been appointed but “the court refused and told them to argue or the verdict will be announced”.