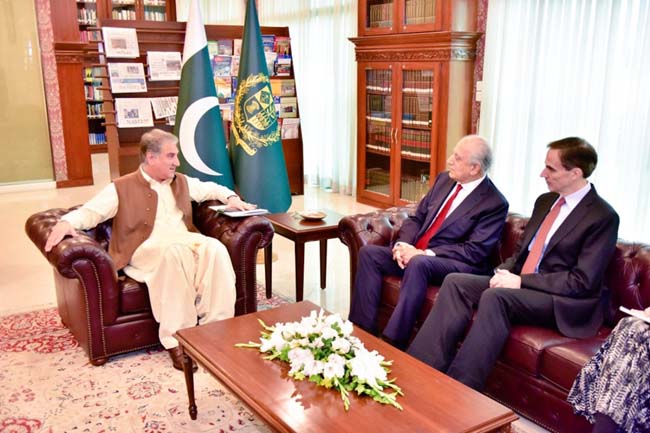 Pakistan underlines importance of early US Taliban peace deal and intra-Afghan talks.  Foreign Minister Shah Mehmood Qureshi share it with the US Special Representative for Afghanistan Reconciliation, Ambassador Zalmay Khalilzad on Friday.
Khalilzad called on Foreign Minister Qureshi in Islamabad. The latter also underlined the need to be mindful of the role and activities of spoilers who did not wish peace to return in the region.
According to ministry of foreign affairs, Khalilzad apprised the Foreign Minister of the latest situation in the Afghan peace process.
Furthermore, Qureshi reiterated Pakistan’s steadfast support as well as facilitating role in the Afghan peace and reconciliation process.
Pakistan sees President Trump’s decision to resume dialogue with the Taliban a positive development. Because it would help establish peace and stability in Afghanistan and the region.
Pakistan underlines importance
He further underscored the importance of early and successful conclusion of the U.S.-Taliban peace deal and start of intra-Afghan negotiations.
Moreover, he reiterated the importance of reduction in violence and all parties fulfilling their respective commitments.
The vision of economic prosperity and connectivity could not be realized without a stable and prosperous Afghanistan, FM said
He assured that Pakistan will continue to play its positive role towards deepening bilateral trade with Afghanistan. FM also vowed the continued positive role for realizing shared vision of regional connectivity.
Meanwhile, Khalilzad also tweeted about Islamabad visit and meetings with Pakistan officials, including army chief.
Zalmay further that he updated them on the status of talks. He said US welcomed Pakistan’s help to facilitate a reduction of violence & ceasefire in Afghanistan so we can pivot to intra-Afghan negotiations.
However, Zalmay also announced a break in talks with Taliban due to attack on US base in Bagram.

The US special representative for Afghanistan Zalmay Khalilzad made this announcement.

He announced pause in talks with Taliban while expressing outrage at Bagram airbase attack.