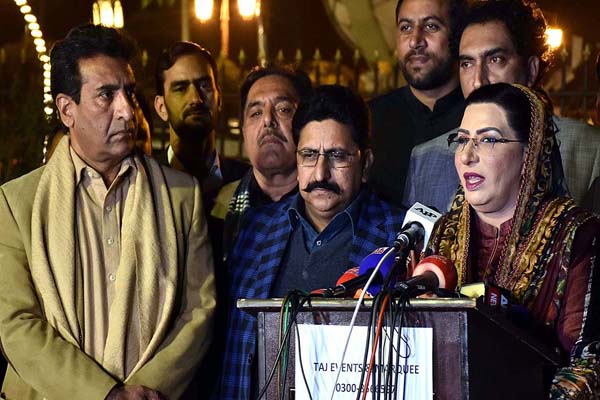 Test Cricket revival in Pakistan with the arrival of Sri Lankan cricket team has disseminated a message of peace to the world. Special Assistant to the Prime Minister on Information and Broadcasting Dr Firdous Ashiq Awan said on Wednesday .

She said this while talking to the media persons at a reception given in her honour by APP Employees Union in Islamabad.

She noted the visit of Sri Lankan team a manifestation of the fact that 220 million Pakistanis are peace-loving people.
Credit for revival of peace in the country goes to nation, armed forces, law enforcement agencies and the civilian administration because they offered great sacrifices in the war against terrorism, she said.

Meanwhile, Firdous Ashiq also spoke on PIC attack. She said Prime Minister Imran Khan took notice of the incident. He directed the Punjab chief minister and chief secretary to hold an inquiry for fixing responsibility of the heinous act. The law would take its course to bring the culprits to book, she added.
Furthermore, she condemned the lawyer torturing Punjab Information Minister, ransacking of the hospital premises, harassing of patients and their relatives, and later indulging in a fight with the police.
Only black sheep among the lawyers or the Pakistan Muslim League-Nawaz (PML-N) activists wearing black coats could indulge in lawless activities as no educated person could even think of doing such acts, she said.
Those, who attacked the doctors and para-medical staff, and set a police van on fire had the mindset of PML-N, she said.

Moreover, the special assistant said the audit report of 2015-16 had pointed out irregularities of Rs 108 billion in the LNG (liquefied natural gas) import deal. And this exposed the PML-N’s claims of victimization, she noted.
Due to the mismanagement and irregularities of the PML-N government, the consumers had to pay inflated gas bills, she said.
Awan further said that the opposition leaders were in the habit of crying foul whenever they faced the accountability process.
However, the Pakistan Tehreek-e-Insaf government was determined to recover every penny looted by the past corrupt rulers, she said.

To a question about the bail of Pakistan peoples Party leader Asif Zardari, she said the government did not create any hurdle in his release as every person had the right to get medical treatment.
However, it was the purview of National Accountability Bureau to adopt a line of action on the matter, she said.
She expressed the hope that unlike Nawaz Sharif, Asif Zardari would focus on his medical treatment.

She lamented that the hapless Kashmiris were denied their fundamental rights, including religious rights, even on Human Rights Day Tuesday. She emphasised that the international community and human right bodies should play their due role in pressurizing India to stop rights abuses and atrocities in the occupied Kashmir.
Meanwhile, Awan referred that Prime Minister Imran Khan was highlighting the Kashmir issue at all international forums vigorously. She vowed that Pakistan would not leave the Kashmiris alone or at the mercy of circumstances.
GTV Network HD