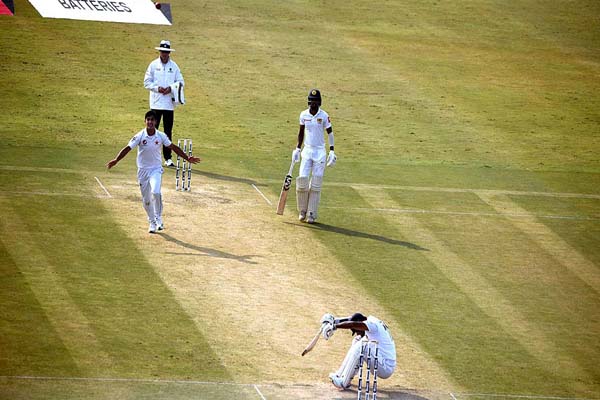 Sri Lanka loses 5 wickets as Pakistani bowlers restricted the Sri Lankan team to 202 in 68.1 overs on first day of the historic test match.
The match is being played at Pindi Stadium. The Test has put an end to the decade-long drought of Test cricket in the country.
In the morning, Sri Lanka won the toss and piled up 202 runs for 5. The day closed 20.5 overs earlier due to bad light.
On day one, Dhananjaya de Silva remained unbeaten on 38 while Niroshan Dickwella at 11 not out.
Sri Lanka skipper Dimuth Karunaratne scored 59 runs on 110 balls with 9 fours. However, Shaheen Shah Afridi sent him to pavilion through lbw in the 30.1 over.
Interestingly, youngster Naseem Shah went all for praise as he bagged two wickets for 51.
Furthermore, he bowled superb and got away with opener Oshada Fernando and Angelo Mathews on the day. He pitched the ball on a good length which took away Fernando on 40 in the 35.3 over.
Mathews was taken at the second slip by Asad Shafiq when he tried to hit Naseem in the 63.4 over pf the game.
Moreover, he went for 31 on 77 balls including four 4s. Mathews added 62 runs for the fifth wicket with De Silva.
Muhammad Abbas bold Dinesh Chandimal on 2 runs in the 44.2 over thus making a classic comeback to his form.
Usman Shinwari drew Kusal Mendis (2) into the off-drive and edged him to wicketkeeper Muhammad Rizwan in the 41.6 over for 10.
Usman Shinwari and Abid Ali who debuted for Pakistan were given Test caps. However, Pakistan les by Azahar Ali left Yasir Shah out in a surprise decision.
The Pindi Stadium saw fans chanting slogans of Pakistan Zindabad and Thank You Sri Lanka.
The Pindi Stadium is hosting a Test match after a gap of 15 years. The last Test was played between Pakistan and India in April 2004.
Pakistan and Sri Lanka would play the second Test at National Stadium in Karachi from December 19. Karachi last hosted Pakistan and Sri Lanka Test in February 2009.