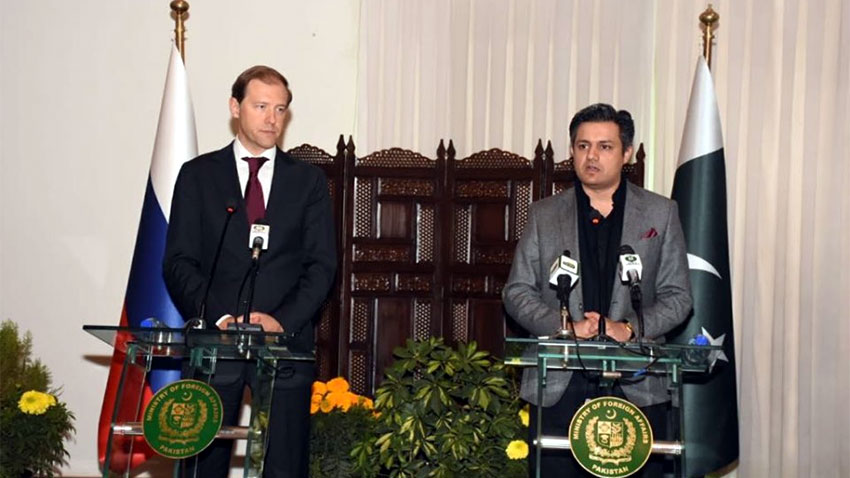 Russia eyes expanded cooperation with Pakistan in many sectors and Russian Trade Minister Denis Valentinovich expressed willingness in this regard.
During the sixth meeting of Pakistan-Russia intergovernmental Commission at the foreign office in Islamabad on Wednesday, he expressed Russia willingness to expand cooperation.
Specially, Russia wants expanded cooperation in with Pakistan in different sectors including the industrial, agricultural, energy, medicine and railways.
Later, while addressing a joint news conference along with Hammad Azhar, the Russian Trade Minister referred Russian experts cooperation for Pakistan Steel Mills establishment.
Russia eyes expanded cooperation with Pakistan
Furthermore, he said we will extend cooperation to Pakistan to revive the Steel Mills and enhance its productivity.
He also evinced interest in building geological capacity of Pakistan apart from building North South Gas Pipeline.
Russia wants to cooperate with Pakistan in aircraft manufacturing sector, Russian Minister said. He further noted immense opportunities for cooperation in the field of agriculture.
Speaking on the occasion, Minister for Economic Affairs Hammad Azhar said Pakistan desires to transform relations with Russia into a strategic partnership.
He pointed to tremendous opportunities to enhance cooperation in the fields of trade, business to business relations and people to people contacts.
The Minister said Pakistan has been included in the list of top ten countries for Ease of Doing Business.
He said due to government’s prudent policies, Pakistan has reduced trade and current account deficits and consequently, international organizations are recognizing Pakistan’s economic stability.
Applauding the Russian offer to revive Pakistan Steel Mills, he said there is huge scope of cooperation between the two countries in energy sector.
He expressed the hope that work on North South Gas pipeline. He urged the Russian companies to invest in oil and gas sector of Pakistan.
Hammad Azhar said Pakistan also desires to enhance cooperation in establishing economic zones. He said cooperation between Pakistan and Russia in the field of Science and Technology will be helpful for development of region.
Both sides resolved to increase volume of bilateral trade from the present levels to its true potential through greater cooperation and enhanced business activities by the private sector of both the countries.
The Russian side invited Pakistan to organize a road show in Moscow to provide an opportunity to the Russian private companies to explore new avenues in Pakistan.
Pakistani side on the other hand invited Russia for their presence in trade expos held in Pakistan.
The Russian side was apprised that Pakistan holds the bilateral and economic relations with the Russia in high esteem which is evident by the recent settlement of the long standing “Settlement of mutual Financial Claims” between the two countries.
The 7th session of IGC will be held in Moscow on mutually agreed dates.
GTV Network HD

MoU between Pakistan and Turkey for cooperation in education sector signed