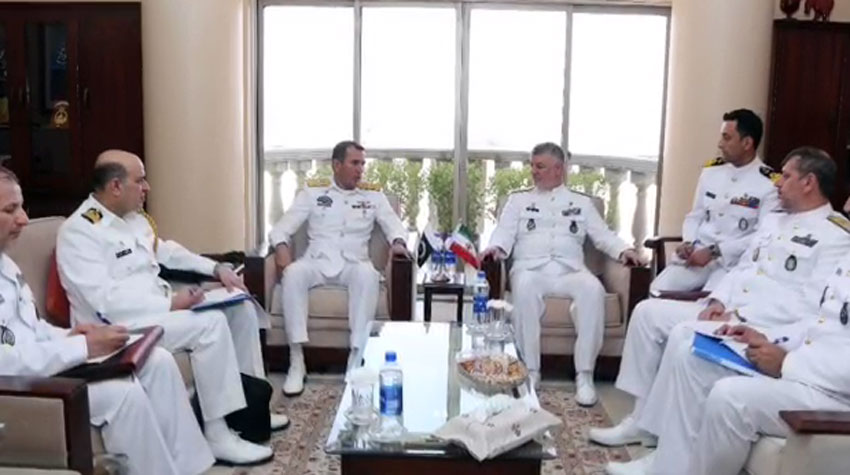 During these meetings, matters of mutual interest and enhancement of cooperation between the twio navies came under discussion.

Dr Hussain Khanzadi also emphasized the need for mutual cooperation and joint efforts for maritime security and stability in the region.

Iran Naval Chief had landed in Islamabad on Monday and met his Pakistani counterpart there.

Chief of the Naval Staff, Admiral Zafar Mahmood Abbasi received him upon arrival at Naval Headquarters.

A smartly turned out contingent of Pakistan Navy presented the Guard of Honour.

Moreover, the dignitary laid floral wreath at the Shuhada’s Monument and was introduced to the Principal Staff Officers at Naval Headquarters.

Later, Rear Admiral Dr Hossein Khanzadi called on Chief of the Naval Staff in his office.

During the meeting, various matters of regional maritime security & stability and mutual interest including bilateral naval collaboration were discussed.

Chief of the Naval Staff highlighted Pakistan’s commitment and performance in fight against terrorism and Pakistan Navy’s contributions for ensuring maritime security and peace in the region.

Rear Admiral Dr Hossein Khanzadi appreciated the role and contributions of Pakistan Navy in maintaining peace and stability in the region and successful conduct of Exercise AMAN-19.

A brief was also given to the visiting dignitary on Pakistan Navy’s perspective on security situation in Indian Ocean Region and Pakistan Navy’s contributions towards peace and stability in the region.

The dignitary was briefed about the plight of Kashmiri people in the backdrop of abrogation of Article 370 & 35-A and Pakistan’s continued support to the just & rightful struggle of Kashmiris.

The dignitary is also scheduled to visit Karachi to have interaction with Field Commanders of Pakistan Navy and visit Pakistan Navy training institutes.

It is expected that the visit of Commander Navy Islamic Republic of Iran shall further promote the existing bilateral cooperation between both the countries in general and navies in particular.