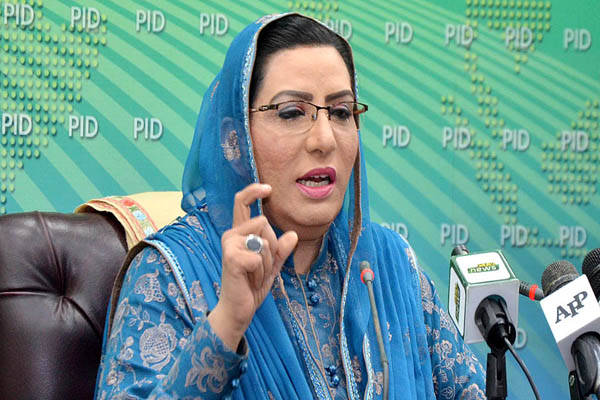 Federal Cabinet dissatisfied over performance of Competition Commission when it met on Tuesday.
While briefing the media persons about the decisions of the cabinet, Special Assistant to Prime Minister on Information and Broadcasting Dr Firdous Ashiq Awan shared this fact. The Federal Cabinet on Tuesday expressed dissatisfaction over the performance of Competition Commission of Pakistan (CCP). It issued directives to take concrete steps for ensuring food security in the country and bringing to book the hoarders and profiteering cartels.
Awan said that the Prime Minister had summoned the CCP high-ups.
He summoned them for briefing on hoarding of flour and sugar and its role in  controlling this practice.
The cabinet was informed that most of the laws related to food security were obsolete and there was no harmony between the Federation and the provinces in this regard.

She said that the Prime Minister gave the observation that the CCP had failed in its role to ensure food security. PM issued directives with a time-line for its reforms and empowerment. Law Ministry was directed to pursue cases of stay orders by edible items mill cartels.
She said that the cabinet also requested the superior judiciary to decide such cases on priority as they were related to public interest.
The SAPM said that the PM also expressed displeasure over vacant post of a member of CCP tribunal which was hampering its functioning and called for earliest filling of the post. Moreover, the cabinet constituted a committee, headed by Dr Ishrat Hussain, to amend food security laws in the country.
The committee would present its report in one month which would be approved by the cabinet as food security policy to get rid of the elements involved in hoarding and adulteration of edible items.
During a briefing by Water and Power Division, the cabinet was informed that when the Pakistan Tehreek-e-Insaf (PTI) government came to power, circular debt was very high which was brought down by this government.
The cabinet was informed that Rs 242 billion subsidy was given to protect consumers using upto 300 electricity units from fuel adjustment affects.
She said that the industrial sector was given Rs 29 billion subsidy whereas the Rs 100 billion subsidy was given to agriculture sector. She said that the PM also directed the Water and Power Division to bring the summary of fixed billing for tube-well farmers in the next meeting.
The cabinet also asked the division to take steps for redressing consumers’ reservations about tampering of meters by DISCOs employees which results in additional burden on consumers.
The cabinet appreciated the performance of the Water and Power Division in controlling line losses and taking steps to introduce regulatory mechanism in DISCOs.
She said that the Oil and Gas Division informed the cabinet that it inherited Rs 181billion deficit due to bad policies of the previous government but it formulated a structural plan to save the consumers from major increase in gas bills.
She said that the cabinet was informed that Rs 10billion subsidy was given to fertilizer industry to ensure stability in the prices of fertilizers. She said that the domestic consumers were given Rs 19 billion subsidy last year whereas the estimate of the subsidy for ongoing year was Rs 30 billion.
Firdous said that the Oil and Gas Division was directed to activate its redundant meter manufacturing industry to reduce the extra cost of gas meters, bought from the market.
The special assistant said the cabinet strongly condemned Indian Lok Sabha for passing the Citizenship Amendment Bill 2019 to offer citizenship to the people belonging to different religions living in different countries
“This legislation exposes the so-called secular face of the Indian government and its pragmatic depiction of the Rashtriya Swayamsevak Sangh (RSS) ideology,” she added.
Dr Firdous said the cabinet expressed its displeasure over unnecessary projection of the absconders and convicted criminals and telecast of their statements on news channels by certain media outlets.
“The cabinet members viewed that there is no precedent in any civilized society to allow such criminals involved in plundering billions of rupees from the national exchequer to use the media as a tool. The minister for water resources informed the cabinet meeting that he has written a letter to the Pakistan Electronic Media Regulatory Authority (PEMRA) to draw its attention towards this issue.”
The law ministry, she said, was directed to devise a mechanism in coordination with PMERA and media stakeholders to curb that practice.
The cabinet approved to transform all the hospitals under the federal government’s umbrella into state of the art healthcare facilities equipped with the latest medical gadgets.
The respective hospitals for the purpose could bring any technical change in their building structures from any institution other than PWD (Public Works Department).
It also gave approval for the appointment of Justice Abdullah Baloch of Balochistan High Court as Special Judge of Appellant Court Balochistan to curb smuggling in the province which was hindering the local industry’s growth.
The cabinet also approved the appointment of Irfan Mustafa, Zulqarnain Ali Khan and Haris Chaudhary as members of the board of governors of Overseas Pakistanis Foundation, and reconstitution of the governing body of Workers Welfare Fund.
It also gave approval for additional charge of director general Civil Aviation Authority to Secretary Aviation Hassan Nasir Jamy. It approved signing of a memorandum of understanding with Afghanistan for cooperation on narcotics control.
The cabinet offered Fateha for Shaheed Colonel Suleman, the hero of 1971 War.