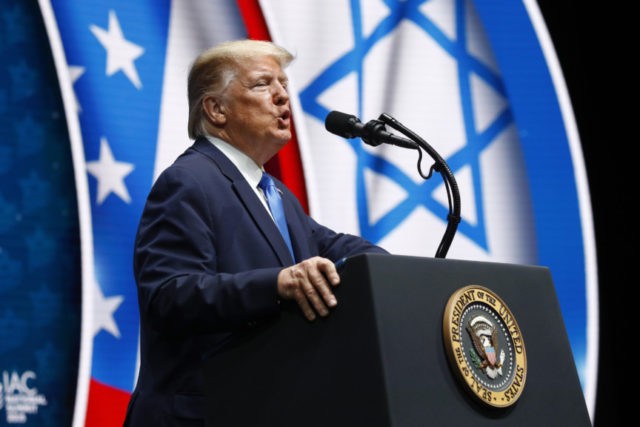 While addressing the Israeli American Council National Summit 2019 in Hollywood Florida, Trump lambasted Democratic legislators.
Trump slams Democratic lawmakers
He said that earlier this year, a number of prominent Democrat lawmakers sponsored legislation to support the BDS movement.
“You know that, right?  Outrageously, the resolution compared boycotting Israel to boycotting Nazi Germany, a grave insult to the memory of the 6 million Jews who were murdered in the Holocaust,” he said.
Trump said ten or twenty years ago, it would have been impossible (because) ‘you got to be very careful.’
Anti Israel allegations
Furthermore, he emphasized: “Make no mistake: Radical lawmakers who support the BDS movement are advancing anti-Israel and anti-Semitic propaganda.”
Amid applause, he asserted that Americans and they would not stand for it.  “We’ve also seen far-left members of Congress proliferate dangerous anti-Semitic rhetoric.  You’ve seen it.  It’s rhetorically and morally unacceptable.”

President Trump further said that one lawmaker even wrote that Israel has hypnotized the world, and said, “Support for Israel is all about the Benjamins.”  You heard that.

Meanwhile, he showered his Jewish son-in-law with praise for his active role in support of Israel.  He called Jared Kushner a truly brilliant young man who loves Israel and he’s fighting hard for Israel.
“He wants to make peace with your neighbors.  And a lot of people say that can’t be done.  A lot of people say it can’t be done; it’s the hardest of all deals.”
US President said that he loved deals, and he used to hear peace with Israel and the Palestinians remains the toughest of all deals is.
Amid applause he thanked Jared and asserted that if Jared Kushner can’t do it, it can’t be done.  He said incredible job he’s doing.  He wants to see that.