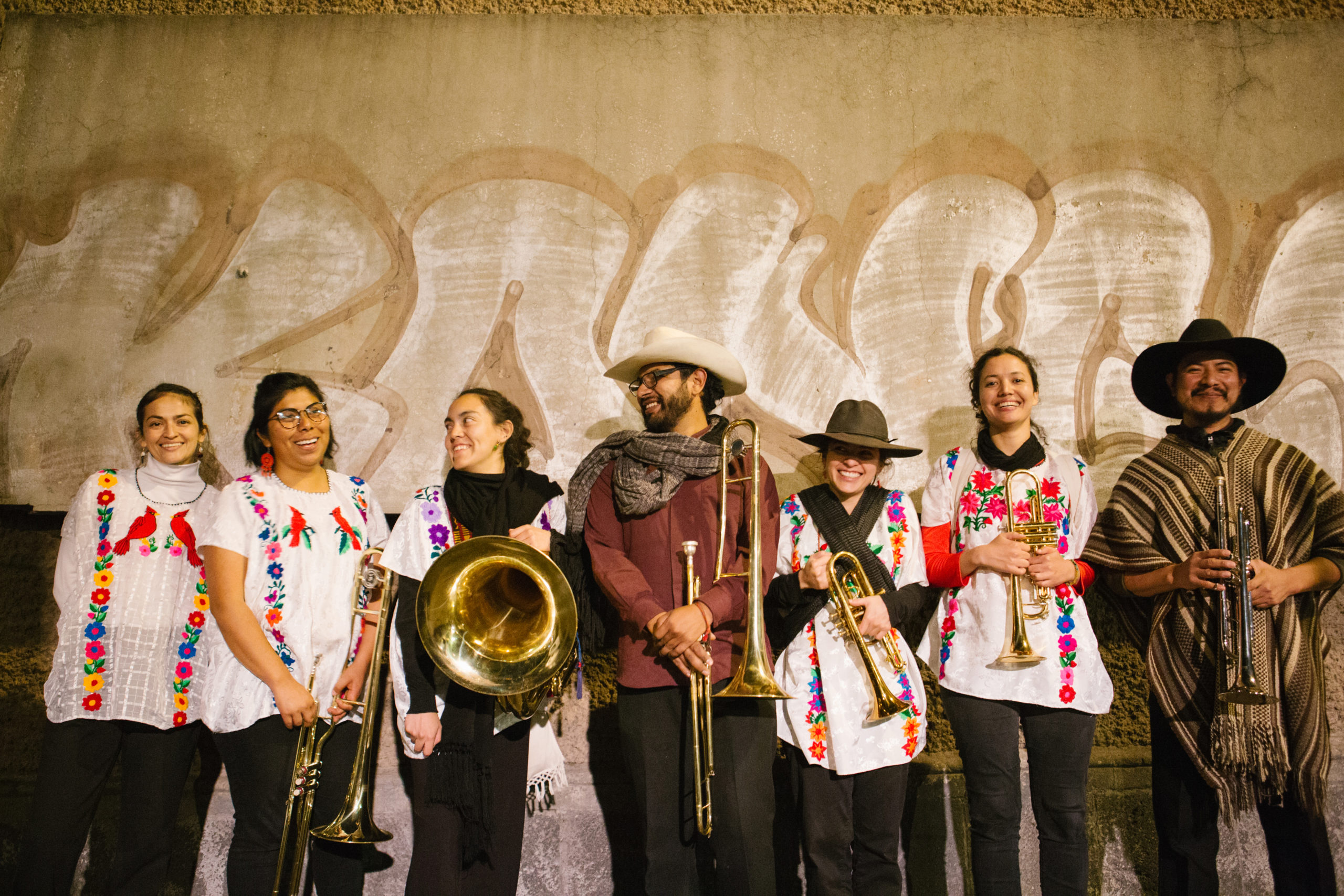 Mexican folk music gets new life due to Mitzy Dávalos
On Sept. 16, Mexican Independence Day, Mitzy Dávalos and the seven other members of La Mixanteña de Santa Cecilia squeezed into the hippest live music venue.
They gathered at the Roma Norte neighborhood of Mexico City.
Lined up in front of the bar, they cleared an impromptu dance floor.

Then they filled the space with the melodic trumpets and energetic percussion that dominate the music of a small region in the state of Guerrero.
A couple of months later, the band members were on the back of a truck, winding their way through the streets of Mexico City as part of a Day of the Dead parade.
For Dávalos, 33, it’s all part of sharing an underappreciated sound with a wider audience — with every note fueling a broader reinvention of Mexican folk music.

Dávalos grew up in the south of Mexico City, in an unmusical but supportive family.
Her journey to the stage started with nine years at the Academy of Mexican Dance, where she met Fredy Campos, a fellow dancer.
After graduating, they joined a Oaxacan symphony band and began to learn saxophone.
Unlike dancing, with which Dávalos has an intense and sometimes torturous relationship, music came easily.

Meanwhile, she was captivated by the tuba, even though at first she struggled to lift the instrument and her arms went numb during concerts. “It was very difficult, but I loved the fullness of the sound,” she says.
When the symphony band dissolved in 2011, Dávalos, Campos and a couple of friends started playing as La Mixanteña de Santa Cecilia.
The name is a portmanteau of the ethnic origins of the original lineup: Mixe, Mixtec, Chinantec and defeña (resident of the capital city). It also remains a homage to the patron saint of musicians.
Specially, they aimed to share the traditional music of the town where Campos’ mother was born.
“In Guerrero, the bands play every day, every fiesta, all hours of the day and night.

Meanwhile, she also said they have an incredible repertoire.
“Since Fredy grew up there, it’s his tradition, his roots. He has it inside him.”
Although Campos may be the more naturally musical of the two, he says that Dávalos is the driving force behind the band’s popularity.
Furthermore, they have built a dedicated fan base in Mexico City, where they play at cultural institutions, festivals and private parties.
“The ideas, the projects that I dream of, it’s because of her they actually start to get built, thanks to her patience, intelligence, making the decisions,” Campos says.
Moreover, tThe two also have a dancewear label, which is their main source of income.
Today, La Mixanteña is made up of Campos, Ana Meixueiro and Maira Arroyo on trumpet, Mario Aguilar and Lucía Luengas on trombone, Yessica Basaldúa and Asael Domínguez on percussion and Dávalos on tuba.
Notably, they use most of the money they make as a band to travel to Guerrero annually and to invite musicians from the region to Mexico City to continue the cultural exchange.

The band’s majority-female lineup is unusual among traditional music outfits in Mexico City.
But, in their fight to preserve regional folk music, La Mixanteña is not alone.
The music of the Sotavento region of Veracruz, known as son jarocho, has become similarly synonymous with the renaissance of folk music genres in the capital. Thanks to its accessible, party-friendly style.
La Mixanteña’s music can be more challenging, due to the large wind instruments and hyperspecific regional origin.
While mariachi and banda continue to dominate, Davalos content to introduce a lesser-known genre to audiences looking for an alternative.
“What we’re doing is not a difficult job per se, but we are trying to get people to hear something new,” she says.
Camilo Raxá Camacho Jurado, a musician and a researcher at the Fonoteca Nacional, Mexico’s national sound library, agrees that some genres of folk music are undergoing a revival.
“On one hand, we have the musicians that are trying to stay true to the traditions in an urban context,” he says.
“And on the other, the musicians who, even if they come from a certain tradition, are looking for fusions with other styles and are encouraged by public institutions.”
Dávalos and La Mixanteña are firmly in the first camp, as they meticulously re-create songs that have been passed down for generations in Guerrero.
However, according to Camacho, the dynamics of folk music in Mexico speak to a larger issue: the systematic dispossession of land from indigenous and rural communities and therefore their ability to control their own culture.

She grew up alongside millions of others in Mexico’s ever-expanding metropolis but Dávalos doesn’t know her family’s ethnic or cultural background.

However, playing with La Mixanteña has changed her relationship particularly to her heritage.

“It was like I had found a root, even if it wasn’t mine, and I grabbed it and made it mine,” she says.
“A lot of people from Mexico City are starting to think about who we are, instead of just waking up, going to work, coming back and going to sleep. I think we  should look for the meaning in things.”
OZY’s 5 Questions With Mitzy Dávalos

The last book you read?

What do you worry about?

Right now, I’m worried about my health. In the last couple of years, each year something has happened to my body. That has forced me to stop and figure out what it is.

The one thing you can’t live without?

I think movement. I’ve always been a swimmer; I like it a lot. And at the moment I’m back in ballet classes.

Who’s your hero? I think myself

I was raised Catholic but it got to a point where I said, “Enough!” It always annoys me when people say something happened because of God, because I feel like I did it; it was me. She said she put in the effort. She worked. I did everything, she said.

I don’t really have a list. But maybe I would like to live in the countryside and live off the land for a while.
GTV Entertainment